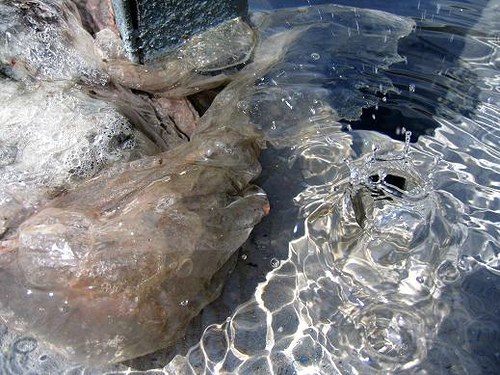 Plastic, and in particular plastic grocery bags, are a big environmental problem because of the huge time taken to degrade in the environment. A collection of plastic the size of a large country is currently floating in the gyres of the Pacific Ocean. Some plastic waste takes 1000 years to be broken down by nature.

Daniel Hurd, a 16 year old high school student from Canada, did a science project on microbes and isolated the bacteria that digests the plastic found in grocery bags and other packaging. By concentrating the solution, he found he was able to break down the plastic by up to 40% in just a week. In addition to winning plenty of local and national prizes, Daniel plans to develop his discovery to help get rid of the nasty disposable plastics problem… and ferment some freaky plastic beer in the process!

With the US, Japan and China all actively talking about permanent settlements on the Moon and Mars, not to mention the prolonged stays of astronauts on the International Space Station, attention is being focused on a well-known but little understood fact: the human immune system actually degrades in weightlessness.

The human immune system, which [is] as complex as the central nervous system, includes an arsenal of responses to invading bacteria, viruses and other pathogens – ranging from first responders such as neutrophils and microphages to more sophisticated T-cells and B-cells that act on a molecular level. Although research into the workings of these infection-fighters during space missions remains limited – because of technical problems with collecting samples in space, very limited crew time and, more recently, deep funding cuts – [many] key infection-fighting molecules appear to be less available to people in space.

Not only are people more susceptible to sickness inducing microbes in zero gravity, but it also appears that some microbes, such as salmonella, become significantly more virulent in weightlessness.

Panspermia is the theory that life on Earth may have arrived in a nascent form from outer space, carried through the void as bacteria in comets or asteroids. It’s controversial, certainly, but persistent too (as well as being a classic science fiction trope). A Scottish scientist has decided to test the theory for plausibility by sending a chunk of rock into orbit and back on an ESA spacecraft, to determine whether microbes can survive not just the cold and vacuum of space, but also the violent physics of atmospheric reentry.

Update! This just in: Centauri Dreams pours water, or rather radiation, on the plausibility of panspermia.