I’ve been talking a lot about media in this column lately. We’re seeing a lot of fast change in the amount of media available, the way we consume that media, and also in what that media says. One of the new media books I’ve been reading is Al Gore’s iPad app version of “Our Choice” about Climate Change. As I write this, it’s pouring rain and hail outside my window and ten degrees colder than normal. The city of Joplin has been almost leveled by a tornado, and at this very moment there is a tornado warning in effect in Northern California (which is not historically a place where many tornadoes touch down). So I decided to write about climate change. END_OF_DOCUMENT_TOKEN_TO_BE_REPLACED 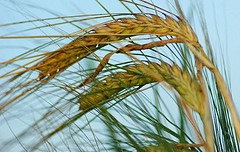 In the hugely polarised sphere of debate around climate change, there are a few thinkers who float outside the two core camps of belief and skepticism. One of those would be Brian Wang, who seems pretty convinced that AGW is a genuine phenomenon, but who also thinks it’s not going to be an unmitigated disaster. For example, he has a post responding to suggestions that a global temperature increase would lead to mass famine and starvation, in which he lists currently available or imminent technologies and scientific developments that could cope with the changed climate and keep the planet’s belly full. [image by sarniebill]

Of course, it’s worth remembering that a large percentage of the Earth’s population doesn’t have enough to eat already… and that a small percentage consumes way more than it actually needs. Keeping up production levels will be important, sure, but efficient and fair distribution of food resources would go a long way toward helping us ride out the rough patch. But then the same applies to energy resources, and we’ve already seen how popular the redistribution idea is with those who have the most to lose…

[ Feel free to discuss Wang’s points in the comments, but as always with this sort of post, unqualified trumpeting of ideologies from either side of the fence will be deleted without prejudice – that applies to climate change denial and climate change doomsaying. I have better things to do than referee an unwinnable slapfight, I’m afraid, so check the comments policy before you post. ] 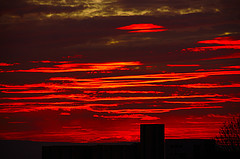 Futurist Brian Wang has had it with the doom-mongers – he’s pretty sure there’s not going to be any global collapse, and he’s got a list of reasons why. Here are just a few:

5. In regards to global warming and environmental concerns:

Well, possibly, but geoengineering is a very speculative field indeed, as noted yesterday. And how are you going to defeat the political inertia on energy source changes?

Yes, but where’s the motivation for those hungry and desperate people going to come from?

Wang’s points all make sense, but they all seem to assume the presence of a strong and clearheaded global or national leadership which, most importantly, hasn’t lost the respect of its subjects or its power to organise them into productive and efficient units.

Wang frequently compares these potential responses to war-time mobilisation efforts, and as regards the scale of effort needed that comparison has validity. But I’m not so certain about his confidence in the psychology of a mobilisation of that sort; before his list, he says:

One thing of note is that most people usually think that Hitler and Stalin were bad guys for killing or causing the death of about 100 million people. Most of the civilization die off scenarios are that level of death each and every year for 70 years. 1000 times the number of deaths in the holocaust. Why is there the belief that significant mitigation efforts would not be made ?

Because political rhetoric is more easily focussed on an enemy with a face, perhaps?

The problem with existential threats is that they’re hard for our fundamentally selfish and short-range psychology to focus on. When you’ve not got enough to eat, your first priority will be filling your stomach, not saving the world. Mobilising people on the scale of nations takes a government with its people’s ear and trust, or at least their obedience under pressure… and with exception of some of the more totalitarian regimes on the planet, those are in short supply at the moment, and likely to be more so as the number of tangible existential risks increases, in my opinion. [image by sashomasho]

What do you think – would the world come together in the face of a genuine extinction event, or would it be every man for himself in the last days of civilisation?