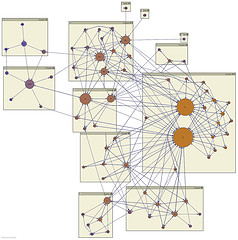 Seeing as how I ended up with a whole bunch of related links, I thought they might as well all fit in one post. So, your overarching thematic question is: the power of the web and social media is pretty much a given, but does it empower us in ways that are beneficial or detrimental?* [image by arenamontanus]

For a start, Bruce Sterling points to what must be the third story I’ve seen in the last year about what happens when jurors are accustomed to social media and ubiquitous information access. In a nutshell, it’s almost impossible to keep people in an informational vacuum without locking them up in a Faraday cage, or to keep them from Tweeting about a case they’re hearing… so what happens to the existing legal model of the unprejudiced jury of your peers? Pandora’s box is well and truly open; how can we develop fair trials in the information age? Expert systems instead of juries? Crowdsourced multiplex juries? Or a trial process that not only accepts but embraces its position at the centre of a media ecology based on novelty and shock?

Over in Egypt, however, the political counterculture is just starting to flex the lithe and slippery new limbs that the internet has provided it, thanks to the incumbent government’s possibly self-defeating decision to leave the internet predominantly uncensored in the hope of encouraging international trade and domestic development. Decentralised networks like Twitter are undermining the official media controls and embargoes that are the hallmark and lynch-pin of the despot… with the end result that the Egyptian government is falling back on the time-honoured (if counterproductive) methods of intimidating and threatening the loudest dissenting voices.

Meanwhile, televangelist megapastor Rick Warren caves in to public opinion and writes publically to Ugandan ministers to condemn their violent persecution of homosexuality. While it’s impossible to truly know the mind of another, I think I can safely assume that Warren would have lost no sleep over the Ugandan lynch-mobs; the bad publicity focussed on himself as a result of staying quiet, however, was simply unacceptable. A small victory for public opinion, perhaps.

But that knife cuts both ways. Remember me linking to an interview with Indian science fiction author Ashok Banker, in which he took the Western publishing industry to task for institutionalised racism, accompanied by a chorus of voices denying that any such racism existed? Well, that interview has been deleted from the World SF Blog at Banker’s request, because he and his family have been receiving death threats in response to it, through assorted social media channels. A sad story, and one that pretty much proves his initial point… as well as demonstrating that the “pure” democracy of the web can enable the primacy of hatred just as easily as justice (your postcard from Switzerland has just arrived). It all depends on which group cares enough to do the most hard work with that media lever.

And speaking of inequalities, here’s a post from a well-known figure in the copywriting blogosphere, wherein he reveals that he’s actually a she. And no, it’s not even some dramatic story of gender confusion and coming out: it’s an inside account of the glass ceiling that still exists in the Western world for women who dare to make their own way in a male domain. Long story short: after a long period of crap work, poor pay and demanding clients, she started using a male pen-name and found that everything improved drastically.

In some ways, there’s a small victory for the web here: intertube anonymity overcomes the gender boundary, saves family from poverty! But the story overall is a sad one, highlighting an institutionalised misogyny that we still perpetrate at a subconscious cultural level, even on the supposedly egalitarian plains of the internet. Worth bearing in mind next time the subject of female authors submitting stories using their initials rather than their first names comes up, and folk start saying that they’re doing themselves a disservice by doing so, eh?

[ * Obviously the answer is “both”, but I think there’s a lot of value to be gained by thinking about how these things happen. We’ve asked whether the web is an inherently democratising force here before, and the stories above seem to suggest that social media empowers the most vocal and/or powerful groups that possess the savvy and access to use them effectively. In Egypt, that appears to be the good guys (at least from my perspective); unfortunately, that doesn’t seem to be the case everywhere. ]