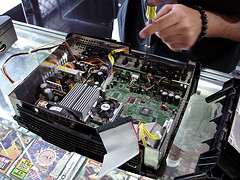 Given the ubiquity of the story at the moment, you may well have already heard about the Los Angeles man facing a potential ten year jail term for the heinous crime of modifying games consoles. If so, you may be wondering exactly how that law operates – after all, if you own something, shouldn’t it be your right to do what you wish with it? TechDirt highlights the disconnect:

It’s interesting to see the use of the word “jailbreaking” here, as that’s more commonly been applied to iPhones — where it’s common. Usually, this action has been referred to as “modding” or “modchipping” when it came to consoles. But the basic fact is that the actions are effectively the same — and both should be perfectly legal. Modifying legally purchased hardware should never be against the law. It’s possible that you could then use that modified hardware to break the law — and no one’s saying that’s okay. But the act itself of modifying the devices should never be against the law — especially where it could lead to a ten-year prison sentence, as in this case.

Ars Technica consulted a legal expert to get the real skinny on the situation:

The news was bad. “With hardware, you can do pretty much anything you want with it. There are very few rules that apply. You buy it, you own, you can take it apart, and that’s perfectly fine,” she explained. The problem is that no one simply modifies the hardware. “It becomes complicated with modern hardware because it’s combined with firmware, the embedded software.”

The infamous DMCA states that you can’t circumvent any software protection to get at the copyrighted work it protects. If you’re using a software exploit or installing a mod chip, you’re disabling that protection to allow yourself to run homebrew code, and you’re running afoul of the DMCA. “Thou shall not circumvent,” Granick told Ars, counting the two ways to break the law. “And thou shall not provide tools to others.

The intent is meaningless. Even if you simply want to modify an Xbox to use as a media center, you’re breaking the law, since you’ve given the system the ability to run unsigned code.

So, what’s clear is that Crippen’s arrest and charges are completely legal. What’s not so clear is whether or not they should be, and whether the potential penalty is even slightly proportional to the crime in question. Five years in the clink for modifying a single games console seems more than a little excessive, after all; here in the UK, the average house burglar doesn’t serve a stretch that long. [image by videocrab]

One suspects that, much as with the Thomas and Tenenbaum cases, the ESA is trying its best to make an example of Crippen, pour discourager les autres. How effective that could possibly be is anyone’s guess, but I wouldn’t want to bet on console modding disappearing any time too soon. Crippen himself makes the point pretty clear in the closing lines of Threat Level’s report:

He said it took about 10 minutes to jailbreak a console.

Where did he learn the skill?

And there it is; I hope the ESA has a lot of nails, because the lid to Pandora’s Box isn’t going to close as easily as they’d like. The question is whether market forces will eventually turn people toward platforms with open source firmware, or ones which simply don’t come with any restrictions on what you can do with them – like the average desktop PC, for example.

The games console market grew strong in the days when most people couldn’t afford a powerful general purpose computer, but nowadays they’re cheap enough that people use them as little more than DVD players; what will it take for consumers to stop paying through the nose for the privilege of being locked into a piece of hardware where obsolescence and restricted use is an integral part of the package? The answer my gamer friends give me is that you just can’t get enough good games that run on PCs… which sounds to me like a market gap waiting to be exploited.

Will the next decade or so see an increase in locked hardware, or will openness become a strong selling point? Hell knows that when I can actually buy things like augmented reality spex, I’ll be buying the open-source ones that allow me to do whatever I want with them.