“It’s the season of cyber-panic,” says The Guardian‘s John Harris, and then proceeds to add some more cyber-panic to the mix. After all, we’re well overdue for a reboot of the “Google is a dangerous monopoly” meme, aren’t we?

We seem to accept it as something as inarguable as the weather, but Google now has a terrifying dominance of the world’s internet use. In Europe, it controls around 90% of the online search market.

I’m not going to dispute the figures, but it’s not like there aren’t dozens of other search engines people could use. Even if you put forward ignorance of alternatives and userbase inertia as components of that dominance, I’m still failing to see how Google is the bad guy here.

As is Google’s apparent appetite for any technology business it can get its hands on: in the first 10 months of 2010 alone, it spent $1.6bn on new acquisitions. If you have ever raged against the stranglehold practised by Rupert Murdoch, bear one thing in mind: Google’s power now threatens to make him look like a village newsagent.

On the contrary; Google is more like a newsagent than Murdoch, because it’s primarily in the business of locating and supplying media and providing platforms for people to create their own; Murdoch is a top-down content creator and peddler of dubious ideological flim-flam. Or, to put it another way: Google owns pipelines, Murdoch sells sewage.

Google has a shot not at control of the means to access information, but the information itself. Potentially all information, which is something worth panicking about.

Google has no “shot at controlling all information” whatsoever. If it starts censoring or massaging its results – which would get spotted pretty quickly, thanks to legions of competitors looking for a handful of mud to sling – Josephine Average can simply use an alternative search engine, blogging platform, online video hosting service, whatever. Google is not a telco; it has no way of controlling what comes into your house via that bit of optical fibre unless you choose to use it as a gateway. Mister Harris’ concern should perhaps be directed toward the telcos themselves, whose resistance to net neutrality is far more suspect and manipulative than Google’s dominant market share in search.

In one of those turnabouts that defy satire, Microsoft is pursuing Google via the European commission, claiming that it unfairly promotes its own services via web searches.

Y’know what? When I look at the BT website, they don’t tell me about the offerings from other telcos. When I look at Microsoft’s website, I don’t see a message saying “or, of course, you could always get a Mac”. When I go to Burger King, there are no ads for Kentucky Fried Chicken. Microsoft’s lawsuit is petulant tit-for-tat obstructionism, nothing more.

In Texas, antitrust investigations by the attorney general’s office are ongoing, triggered by websites’ complaints about their lowly Google rankings.

Google makes it very clear how to make your site rank well, and what actions will count against you. Their algos aren’t perfect, of course… but they fix them regularly and are fairly transparent about how and why they do so. If you don’t like Google’s rules, don’t optimise for their search engine. Google doesn’t owe your business a living.

Yesterday, Bloomberg ran a story with the headline “Google Antitrust Probe by US Could Take Years”, and paraphrased a renowned technology lawyer: “The agency is likely to examine whether Google is using its position in internet search to subdue rivals in adjacent markets with threats and jacked-up advertising rates.” It would certainly be a start.

Sounds more like a fishing expedition than an effort to fix a clear and observable problem to me… one that will tie up the company’s resources and energies in proving its innocence. Given the source of said lawsuit – oh, look, Microsoft again! – it’s not exactly hard to assume that someone is more interested in throwing caltrops into Google’s path than working out ways of competing in the marketplace in which Google dominates. Shorter version: if you can’t beat ’em, use the legal system to slow ’em down while you try to get a jump on ’em.

In the meantime, some advice, not least for employees of the US government. Don’t feed the tiger. Think back to the frontier days of dial-up, when pluralism reigned. Have a look around for alternative email providers, search engines and video-sharing sites.

This is pretty much the only sensible paragraph in the whole damned piece: the US government is indeed extremely unwise to rely on outsourced services if secrecy is of great importance (though they’re not exactly great at internal security when they do keep things local, either), and – if you really do fear Google’s dominance – you should put your money where your mouth is and use someone else’s services.

Cue accusations of Google fanboyism in 5… 4… 3… Look, I don’t care for Google any more than I care for any other company that provides me with useful services, I fully understand that they’re a profit-orientated business and that “don’t be evil” is very open to intrpretation as a coprporate slogan, and I’m happy to rag on them when their stuff doesn’t work (which is why I’m an unstinting Blogger hater, f’rinstance). Show me evidence that Google are spiking the competition’s wheels, and I’ll gladly hear your case. But if all you can do is bitch about the fact that 90% of people think they deliver the best results and use them as a result, I’m going to file you under “probable axe to grind”, or possibly “journalist in search of nebulous bogey-man”. 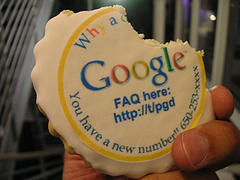