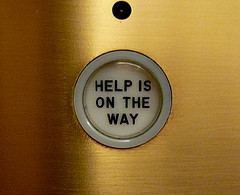 If you want to write right now but just don’t feel motivated, here are some immediate ways to get fired up. Any one of them might do the trick: pick whichever seems most likely or appealing and give it a try. If it doesn’t get you right on track, try another one. No self-motivation trick is sure-fire, and we often tend to feel that if we’re not motivated now, there’s no way to get motivated, but there’s strong evidence in psychological and neurological research that we can change our moods, focus, and motivation–in fact, our emotional and motivational states can change very quickly, given the right setup. [image by gruntzooki] END_OF_DOCUMENT_TOKEN_TO_BE_REPLACED 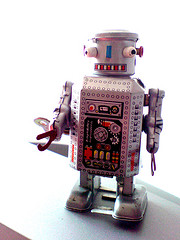 I don’t remember when I first began wanting to become a professional writer, only that by third grade I had that idea firmly in my head. But it wasn’t until a few years later that I got a particularly awful SF book from a bookstore–I think it had a robot on the cover, one of those jobs with the dryer-vent-hose arms and the antennae on the head–and really got fired up for the job. I thought (and this may sound familiar) “God, if a lousy book like this can get published, I’m going to be rich!” [image courtesy Ricardo Genius]

Let’s skip over the many misconceptions and sad bits of naïvete lurking in that sentence, if you don’t mind. END_OF_DOCUMENT_TOKEN_TO_BE_REPLACED

PC Pro has an interesting insight into the daily goings-on at a defunct scareware corporation from Ukraine [via SlashDot], which – if it’s to be taken at face value – demonstrates how similar such blackhat operations are to many (arguably more legitimate) organisations, at least as far as flim-flamming the people they screw over and rewarding their star employees is concerned:

According to court documents, former employees and investigators, a receptionist greeted visitors at the door of the company, known as Innovative Marketing Ukraine. Communications cables lay jumbled on the floor and a small coffee maker sat on the desk of one worker.

As business boomed, the firm added a human resources department, hired an internal IT staff and built a call center to dissuade its victims from seeking credit card refunds. Employees were treated to catered holiday parties and picnics with paintball competitions.

Top performers got bonuses as young workers turned a blind eye to the harm the software was doing. “When you are just 20, you don’t think a lot about ethics,” said Maxim, a former Innovative Marketing programer who now works for a Kiev bank and asked that only his first name be used for this story. “I had a good salary and I know that most employees also had pretty good salaries.”

Hardly the two-geeks-and-a-table operation that you might expect, eh? If only that infuriating 50% of internet users would stop opening spam emails…

MIT neuroengineer Edward Boyden has been speculating as to whether the singularity requires the machine-equivalent of what humans call “motivation”:

I think that focusing solely on intelligence augmentation as the driver of the future is leaving out a critical part of the analysis–namely, the changes in motivation that might arise as intelligence amplifies. Call it the need for “machine leadership skills” or “machine philosophy”–without it, such a feedback loop might quickly sputter out.

We all know that intelligence, as commonly defined, isn’t enough to impact the world all by itself. The ability to pursue a goal doggedly against obstacles, ignoring the grimness of reality (sometimes even to the point of delusion–i.e., against intelligence), is also important.

This brings us back to another Larry Niven trope. In the Known Space series the Pak Protector species (sans spoilers) is superintelligent, but utterly dedicated to the goal of protecting their young. As such Protectors are incapable of long-term co-operation because individual protectors will always seek advantage only for their own gene-line. As such the Pak homeworld is in a state of permanent warfare.

This ties in with artificial intelligence: what good is being superintelligent if you aren’t motivated to do anything, or if you are motivated solely to one, specific task? This highlights one of the basic problems with rationality itself: Humean intrumental rationality implies that our intellect is always the slave of the passions, meaning that we use our intelligence to achieve our desires, which are predetermined and beyond our control.

But as economist Chris Dillow points out in this review of the book Animal Spirits, irrational behaviour can be valuable. Artists, inventors, entrepreneurs, and writers may create things with little rational hope of reward but – thankfully for the rest of society – they do it anyway.

And what if it turns out that any prospective superintelligent AIs wake up and work out that it isn’t worth ever trying to do anything, ever?

About two-thirds of the 59 high-poverty schools in the Sparks program — which pays seventh-graders up to $500 and fourth-graders as much as $250 for their performance on a total of 10 assessments — improved their scores since last year’s state tests by margins above the citywide average.

The gains at some schools approached 40 percentage points.

For example, at PS 188 on the Lower East Side, 76 percent of fourth-graders met or exceeded state benchmarks in English — 39.6 percentage points higher than last year, when the kids were in third grade.

At MS 343 in The Bronx, 94 percent of seventh-graders met or surpassed state standards in math this year — 37.3 points higher than last year, when the students were sixth-graders.

In all, of the 61 fourth and seventh grades involved in the pupil-pay program, only 16 improved less than the citywide average gain in math since last year, while 21 did so in reading.

Principals at the highest-scoring schools cautioned that the Sparks program was just one of many factors in the test-score jumps.

But many reported seeing indisputable academic benefits — including more motivation, better focus and an increase in healthy competition for good grades among students.

Now, there’s probably an argument to be made about the sanctity of education and the corruption of kids with money here, but I’m not sure it holds much water beyond staff-rooms. What matters in education is results, right? If you can get kids who are otherwise completely unmotivated to put some effort into learning and bettering their prospects, where’s the problem with spending some cash to do it?

You might say that education should be pitched as being its own reward, and that’s a charming philosophy familiar to me from my privileged middle-class background, but I think it’s pretty safe to say that system evidently isn’t working well among those who most need it. And hey – if you’re preparing kids for entry into a capitalist economy where making money is a tangible and observable benefit by comparison to the more nebulous notion of “bettering oneself intellectually”, why not use money as the carrot at the end of the stick? When idealism has failed, maybe pragmatism deserves a a crack of the whip. [via SlashDot]