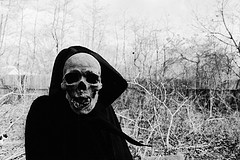 Via Chairman Bruce comes a great article at Wired UK about the phenomenon of Munchausen By Internet – members of online communities who fake serious illness or death for a variety of reasons, be it to dig themselves out of their other untruths or because they enjoy being the focus of mass sympathy:

In his 2004 book Playing Sick, Dr Marc Feldman, a clinical psychiatrist at the University of Alabama, offers the first published investigation into a disorder he refers to as “Munchausen by internet”, or MBI, which introduces an online element to the symptoms of Munchausen syndrome, the condition whose sufferers fake sickness and may demand medical treatment for a illness they do not really possess.

“The easy and ready access to the internet propagates MBI,” said Feldman in a recent email. “In fact, I believe that MBI is more common than MS in ‘real life’. The reason is that it is so easy to use the net to research medical conditions, post fallacious materials, and engage others without the need to literally enact an ilness. Many of these people seem to be very lonely, and the internet offers a readily and continually-available source of unconditional support.”

In one startling case, a woman from New Zealand named “Sara” approached Feldman with an 8,000-word confession of her own Munchausen by internet, a story of vast complexity and novelistic detail in which she created more than eight online aliases, constructed intricate relationships between them, and killed at least five.

It’s grimly fascinating to see how the internet is amplifying some of the weirder parts of human psychology. I can’t help but wonder whether or not this might become some sort of performance artform, though; one of the earliest examples of a faked death online was a guy on USENET:

In 1999, when online interaction was still in its relative infancy, a prominent poster on the popular usenet group alt.religion.kibology perpetrated one of the earliest fake deaths, partly as a way “to be a fly on the wall at my own funeral” but also purportedly as part of an investigation into the nature of online relationships. A long-time and regular poster named M Otis Beard suddenly became unusually argumentative with fellow contributors over a brief period, before one of Beard’s friends, who had met him in real life, posted a muted and thoroughly credible notice that Beard had killed himself.

Some days later, Beard himself resurfaced with a message that, while overbearingly smug in tone, is underpinned by what he claimed was an intellectual motive. After a gleeful pronouncement that “rumors of my death have been greatly exaggerated”, Beard announced that his “little escapade” had been a method of testing the sense of community in the group and had been designed to offer a perverse sense of catharsis when the deception was revealed.

“You thought you had irretrievably lost something; that something is now returned to you,” he wrote. “If I hadn’t made you sad by pretending to be dead, I wouldn’t have been able to make you happy (well, OK, angry and THEN happy) by jumping out of my coffin, whole and hale. Forgive me for putting you through the emotional roller coaster ride, which I hope was a healthily cathartic experience for all of you.”

That sounds exactly like the sort of stunt that the 4chan/Anonymous massive might come up with, keen as they are to shatter expectations, wind up the over-emotional and disrupt internet communities using the very tools used to construct them. I can easily imagine some sort of annual awards for the most convincing, most audacious or most ridiculous faked deaths… and increased awareness of the phenomenon will only make it seem more of a challenge. [image by aliscarpulla]