Most of us are aware that DNA and RNA are the molecular machinery that synthesise proteins and allow the complex reactions of life to take place, but actually visualising the processes is a considerable mental leap.

Most such visualisations rely on visual simplifications that actually present a false impression of the processes involved, but via Eric Drexler we discover the following examples by Drew Berry, which are apparently much truer to the actual processes that occur. Take the seven or so minutes needed to watch this, and you’ll be set up for your daily dose of scientific sensawunda for the rest of the week – biochemistry is incredibly awesome:

Aside from the sheer wow-factor of seeing molecules acting like high-precision machines deep at the cores of our cells, it’s worth bearing in mind that there’s no magic involved, and that we’re constantly getting better at understanding how these processes work.

Which, I expect, is why Drexler is so fascinated by them: once we know how the body’s nanomachines work, we’ll be properly equipped to start building new ones. 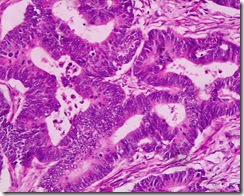 Well, as long as I’m posting about nanotechnology, check this out (Via PhysOrg):

Researchers from the Nano Machine Center at the California NanoSystems Institute at UCLA have developed a novel type of nanomachine that can capture and store anticancer drugs inside tiny pores and release them into cancer cells in response to light. Known as a “nanoimpeller,” the device is the first light-powered nanomachine that operates inside a living cell, a development that has strong implications for cancer treatment.

The pores of the particles can be loaded with cargo molecules, such as dyes or anticancer drugs. In response to light exposure, a wagging motion occurs, causing the cargo molecules to escape from the pores and attack the cell. Confocal microscopic images showed that the impeller operation can be regulated precisely by the intensity of the light, the excitation time and the specific wavelength.

The cells they killed were only in vitro, of course, and there’s the usual caveat:

Tamanoi and Zink say the research represents an exciting first step in developing nanomachines for cancer therapy and that further steps are required to demonstrate actual inhibition of tumor growth.

The accomplishment is detailed in the nanotechnology journal Small. You can find the citation here, but you’ll have to pay to read the article.

And look out for the fine print. One would think that in a nanotechnology journal, it might be very fine indeed. 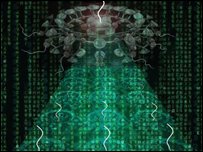 Nanotechnology is perhaps the most rapidly advancing new technology out there right now. All kinds of nanomachines based on biochemical mechanisms, tiny structures of metal or other techniques are being created and studied in universities and laboratories around the world.

Scientists have now created a device two billionths of a metre in size that could work as a chemical ‘brain’ for a group of nanomachines. Potentially this could lead to their use in medical techniques such as nano-surgery on tumours.

“If [in the future] you want to remotely operate on a tumour you might want to send some molecular machines there,” explained Dr Anirban Bandyopadhyay of the International Center for Young Scientists, Tsukuba, Japan. “But you cannot just put them into the blood and [expect them] to go to the right place.”

Dr Bandyopadhyay believes his device may offer a solution. One day they may be able to guide the nanobots through the body and control their functions, he said.

“That kind of device simply did not exist; this is the first time we have created a nano-brain,” he told BBC News.

[story and image via BBC Science/Nature. Thanks to Kian Momtahan for the link!]