Space Adventures announces that Richard Garriott will be the next private citizen to travel to space as a tourist.

Garriott’s father was a NASA astronaut, so that makes it a unique flight. Son pays to fly up, dad was part of a giant government project to fly up.

The flight is October 2008, and Garriott already has a website set up where he’ll be chronicling the whole thing. 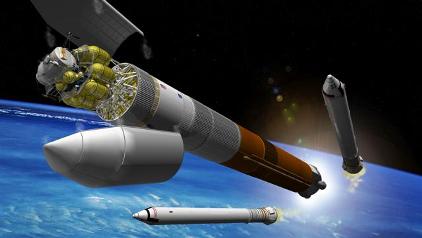 NASA hasn’t had a good year for PR so far. Following on from the embarrassing media circus over the exploits of an ex-astronaut earlier this year, now they’re having to go public with the news that not only were some astronauts drunk in charge of their launch vehicles, but that they also discovered an act of sabotage on a computer module destined for the ISS.

Even the private sector hasn’t escaped the black cloud; an explosion at the test facility of Burt Rutan’s Scaled Composites, the company that is to supply Virgin Galactic with its sub-orbital vehicles, has killed three and injured as many again.

Stories like the above make me think that, as much as good as they look on paper, we probably shouldn’t be building nuclear powered rockets just yet – the cost of mistakes and mismanagement could be far higher.

Bigelow Aerospace is certainly on a roll with their inflatable orbital module projects, demonstrating that you don’t need a vast Federal budget to get functional capsules into space. Colony Worlds suggests that such low-tech success stories will erode political support for the ISS, which will become increasingly hard to maintain once the Space Shuttle is retired. Will this be the tipping point for the commercial space industry?