Does the financial implosion mean the end of the road for nation-states as we know them? John ‘Global Guerillas’ Robb seems to think it might be, as they’re now caught between two increasingly powerful forces:

1. A dominant, turbulent, and uncontrollable global super-network, that is pressuring/weakening/buffeting nation-states from above.
2. Super-empowered individuals/groups rising up from below that are ready to pounce on or exploit any demonstration of nation-state weakness.

As Robb points out, many of the responses to the situation thus far have been based in the same sort of political thinking that dominated the early 20th Century, and suggests that decentralisation is more likely to be a successful tactic:

… decentralization that both improves resilience and accelerates (parallelizes) innovation offers a greater chance of success.   Nation-states that ease the process of decentralization will likely have both the easiest transition to the new fluid environment and the best long term prospects (wealth creation).

In other words, nation-states are most likely to survive by becoming less like nation-states; whether those massive institutions will be able to let go of the reins that easily remains to be seen. 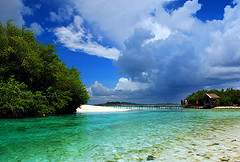 In a world that is increasingly flattened by technology and transportation, it’s getting harder for nation-states to impose restrictions on their citizens. Spain’s abortion laws are the latest to be challenged by Holland’s “Women on Waves” ship, which anchors in international waters offshore from countries with prohibitive stances on abortion to allow women the right of choice without fear of legal repercussions. [via Pharyngula]

When climate change turns entire nations into refugees and/or migrants, will geography cease to determine which legal system constrains you? Or will the notion of physical territory simply become atomised to the micro-scale, like the turf demarcations of London teenagers?