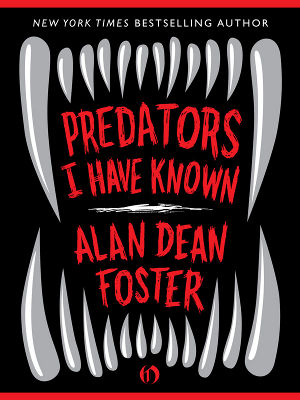 I was watching a nature documentary last night, and the cameraman made a point about conservation that I’d not heard before. To paraphrase, his point was – given we’re very aware that numerous species and habitats are on the brink of extinction, but that inaction is still commonplace – how will we answer our children’s children when they ask us why we let them go? Because they’ll know: that documentary, and many others, will b available on YouTube (or its equivalent); photos of amazing creatures and locations will persist long after the things they depict have departed.We won’t be able to feign ignorance to excuse inaction.

Perhaps being able to see these things, to have them become something more than words in a green group’s press release, is the key to getting people to care enough to act. It certainly seems that seeing nature up close and personal – even its most dangerous elements – has had that effect on Alan Dean Foster, whose memoir Predators I Have Known is launched next week, 22nd February 2011.

Take it away, Mister Foster:

The more I travel to the few remaining comparatively untouched corners of the globe, the more I incline to despair at their prospects for survival. No matter where I go: Asia, Africa, South or Central America, the oceans of the world, I am overwhelmed by the feeling that, good intentions notwithstanding, money trumps conservation every time.

There are places humankind has not yet destroyed. Places untouched and virgin: in New Guinea, in central Africa, in South America, in Borneo, even in the desperately overfished and overexploited oceans. Invariably, these remaining outposts of the unspoiled natural world are protected by and owe their continuing survival to two factors: isolation, and laws that are actually enforced. Ideally, the two exist in combination.

In northern Borneo, a tract of untouched rainforest has been set aside in the Danum Valley. Here uncut diterocarps tower hundreds of feet high, providing food and shelter for a vast range of rare animals that have been exterminated elsewhere on the world’s third largest island. In the central Pacific, Henderson Island boasts some of the most unspoiled and healthy coral reef societies in the entire ocean, thanks to the island’s isolation and the fact that it is regularly patrolled by the U.S. military.

Gabon’s forests still exist because the country is one of the few in Africa that is actually underpopulated. Declared national parks by the nation’s recently deceased long-time leader, it remains to be seen if in the huge areas that have been set aside for conservation, promise will be followed by enforcement. For now, Gabon offers the rare visitor the chance to see an Africa long since obliterated on the rest of the continent.

In Peru a battle brews between those who recognize the value of preserving the country’s natural wonders and those who would (as in Ecuador) exploit them for the hydrocarbons that lie below the forests. In Brazil, a slowing of deforestation holds out the promise of preserving at least some of the original Amazon basin.

Hope for such regions remains, though I fear and expect such preservation may only be accomplished at the point of a gun, as is the case with the rhino in South Africa and the tiger in India. Having let our planet’s wilderness degenerate to its present state, that may be the only viable course that remains to us if we wish to retain even a fragment of the world and the beauty that once was.

My magical statistics monkeys tell me that last week’s post on dissociative fugues was surprisingly popular, so I thought I’d share another article I found fascinating. Yet another hat-tip to Geoff Manaugh at BLDGBLOG for this one; it’s a Scientific American report on naturally occuring nuclear reactors. Yes, you read that right – nuclear power plants that just happened by geological chance.

More than two tons of this plutonium isotope were generated within the Oklo deposit. Although almost all this material, which has a 24,000-year halflife, has since disappeared (primarily through natural radioactive decay), some of the plutonium itself underwent fission, as attested by the presence of its characteristic fission products. The abundance of those lighter elements allowed scientists to deduce that fission reactions must have gone on for hundreds of thousands of years. From the amount of uranium 235 consumed, they calculated the total energy released, 15,000 megawatt-years, and from this and other evidence were able to work out the average power output, which was probably less than 100 kilowatts—say, enough to run a few dozen toasters.

It is truly amazing that more than a dozen natural reactors spontaneously sprang into existence and that they managed to maintain a modest power output for perhaps a few hundred millennia. Why is it that these parts of the deposit did not explode and destroy themselves right after nuclear chain reactions began? What mechanism provided the necessary self-regulation? Did these reactors run steadily or in fits and starts?

Go read the whole thing; the science isn’t too heavy, and it’s a pretty wild idea. I’m pretty sure I’ve read about something similar in a Stephen Baxter novel (though I can’t for the life of me remember which one); at the time I assumed he was speculating in a vacuum, but I guess I should have known better. 🙂

Regarding the popularity of the dissociative fugues post, I’ve been wondering whether perhaps I should be spending more time linking to interesting stuff and less time waffling around on tangents? It’s you guys who read this stuff, so what would you like to see here – more random points of interest, more speculative ramblings, or a blend of the two?

To further my claim that nature has the best propulsion system solutions comes news that cephalopods (squid, octopi etc.) are the inspiration behind a new generation of vortex generators for underwater vehicles.