The Wall Street Journal reports on the inevitable migration of UAV drone technology into non-military spheres of life:

Personal drones aren’t yet plying U.S. flyways. But an arms race is building among people looking to track celebrities, unfaithful lovers or even wildlife. Some organizations would like them for emergency operations in areas hit by natural disasters. Several efforts to develop personal drones are scheduled for completion in the next year.

“If the Israelis can use them to find terrorists, certainly a husband is going to be able to track a wife who goes out at 11 o’clock at night and follow her,” said New York divorce lawyer Raoul Felder.

Drones now are associated with the unmanned Predator craft the Central Intelligence Agency uses to fire Hellfire missiles at militants in Pakistan’s tribal areas. But the essential technology is increasingly available beyond military circles, and spreading fast. An unmanned aircraft that can fly a predetermined route costs a few hundred bucks to build and can be operated by iPhone.

That’s pretty cheap and accessible; club together with a few neighbours, sketch out a rota, pay the kids pocket-money for manning a few shifts a week. Top marks to Randall “FuturePundit” Parker for this bit of close-range speculation:

The ability of surveillance drones to record high-res images could be combined with a wireless link to a criminal face matching computer server. So convicted rapists and muggers could be identified. Crowd sourcing becomes a real possibility. Many different personally owned drones could (along with cameras mounted in cars and outside of stores and houses) all pass info to servers that could then track the movement of known dangerous people (why they are out on the street is another subject). Also, after a crime is committed as soon as, say, a victim of rape or robbery reports the crime all recent drone feed logs in the vicinity could be scoured to identify possible suspects and start tracking them. Neighborhood watches could signal people to all send out their drones to do a massive sweep of the area.

I can imagine flying drones being sent off to a drug store to land on the roof to be loaded with a drug prescription or other light item. The energy costs would probably be lower than the energy costs of driving a car to the store. Wouldn’t work for a large grocery load. But would work for trips to get smaller items.

A bigger flying drone operated by, say, Starbucks or 7/11 could deliver coffee to a number of houses on a route. Or how about drones that deliver newspapers? A delivery truck could drive along with a flat bed where the drones lift off and deliver newspapers down side streets. Reduced labor costs, faster delivery.

Lots of potential apps there… each of them with their own potential shortcomings, exploit opportunities and failure consequences. (The intimidatory power of police drones will be somewhat negated when the rough neighbourhoods they’re intended to patrol can field their own jerry-built squadron of flying camera platforms; who will watch the watchmen, indeed. Won’t be long before some geek firebrand starts mounting Gauss weapons and scramblers on them, either, so plenty of potential for an escalating robot turf war between governors and governed; the street finds its own use for yadda yadda yadda.)

Definitely a potential plank in David Brin’s “Transparent Society” platform, too; the participatory panopticon becomes a lot more powerful when your cameras can move in more than one or two dimensions. And a perfect excuse to dig up one of Anders Sandberg’s classic near-future hazard signs from 2006: 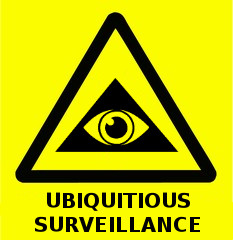