Not that I expect governments and military bureaucracies to change course in response to sensible thinking from qualified experts, the guy who penned (or rather keyed) The Hacker’s Handbook back in the day has co-authored a report that suggests the recently fashionable wing-flapping over “cyberwar” is counterproductive:

Published today, Reducing Systemic Cybersecurity Risk says that a true cyberwar would have the destructive effects of conventional war but be fought exclusively in cyberspace – and as such is a “highly unlikely” occurrence.

Controversially, the OECD advises nations against adopting the Pentagon’s idea of setting up a military division – as it has under the auspices of the US air force’s Space Command – to fight cyber-security threats. While vested interests may want to see taxpayers’ money spent on such ventures, says Sommer, the military can only defend its own networks, not the private-sector critical networks we all depend on for gas, water, electricity and banking.

Co-authored with computer scientist Ian Brown of the Oxford Internet Institute, UK, the report says online attacks are unlikely ever to have global significance on the scale of, say, a disease pandemic or a run on the banks. But they say “localised misery and loss” could be caused by a successful attack on the internet’s routing structure, which governments must ensure are defended with investment in cyber-security training.

Pandora’s box strikes again; code is far easier and cheaper to reverse engineer than a nuke, and requires no expensive and/or dangerous physical contraband. Beware of starting a knife-fight in a downtown full of ninjas.

As if I needed more reasons to mistrust the wild and wacky world of high-frequency trading [via SlashDot]:

High-frequency trading networks, which complete stock market transactions in microseconds, are vulnerable to manipulation by hackers who can inject tiny amounts of latency into them. By doing so, they can subtly change the course of trading and pocket profits of millions of dollars in just a few seconds […]

[…] the root of the problem is the increasing speed of networks; as they get faster and faster, our ability to actually understand events taking place within them isn’t keeping up. Network monitoring technology can detect perturbations in network traffic happening in milliseconds, but when changes occur in microseconds, they’re not visible, he says.

Basically, if you can exploit these tiny differences in latency, you can make your trade before your rival, and get a better profit. For doing, y’know, sweet f*ck all.

Given that the above article comes from an IT news source, this problem is being framed as a hack or exploit; I dare say there’s a lot of trading firms who’d see it as more of a “competitive edge”.

One of the biggest infrastructural components of a developed nation is the transportation network that moves food around the place… trucks and lorries, trains, that sort of thing, all pollution-heavy technologies that cost a lot of money to run. So what could we replace that food delivery network with? How about… a series of tubes. No, SRSLY:

Imagine a 1,500 kilometer underground FoodTubes ring circling the UK. The packet-switched-style network would connect all major food producers and retailers via 3,000 kilos of smart grid controlled air pressure pipe. The Foodtubes capsules, spaced one meter apart, will race about in gangs of 300 or so at 100kph. As many as 900,000 will be in circulation at any given moment, either zipping around beneath London and Liverpool or being loaded and unloaded at freight dockets.

“Really fast food,” Foodtubes literature calls the concept, with big payoffs for the economy and environment. “Inefficient food transport costs the Earth,” another presentation insists. Huge quantities of diesel are burned to move food trucks—17 billion for each 25 million UK homes, which represents eight percent of all the carbon dioxide mixed into the atmosphere.

“In contrast, we transport 180 times more weight of water than food every day (150 litres/person) in pipelines, with little pollution and no traffic jams,” the project notes. “Multiply by 5 to get the totals for the 120 million USA households.”

Add to that the traffic relieving removal of huge trucks from UK roads. 200,000 of them could be replaced by 17,000 kilos of pipelines and capsules, the group estimates, saving the country 40 million tons of CO2 each year, and the world perhaps as much as four billion if the idea was adopted globally.

That’s got to be the most Jetsons-esque bit of speculative technology I’ve seen in a long while. The FoodTubes people seem pretty confident that the actual technology side is plausible, but are also well aware that “[t]he freight industry is deeply entrenched at every level of government and commerce”. No kidding… which leads me to suspect that, plausible or not, FoodTubes is unlikely to get off the drawing board any time soon. 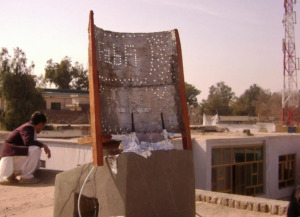 Offered here as an extension of the arguments made by the Prospect Magazine piece I linked to the other week about the lessons to be learned from the last-minute low-cost solutions of slum residents and other disadvantaged social groups, Free Range International hosts a report from an MIT team working in Jalalabad, Afghanistan that describes how an injection of knowledge and expertise can accelerate local progress far more effectively than an injection of externally-managed aid money:

… the irony of the graphic above is particularly acute when one considers that an 18-month World Bank funded infrastructure project to bring internet connectivity to Afghanistan began more than SEVEN YEARS ago and only made its first international link this June. That project, despite hundreds of millions of dollars in funding, is still far from being complete while FabLabbers are building useful infrastructure for pennies on the dollar out of their garbage.

People are smart, adaptable; show them where they need to go, and they’ll find a way. What’s that old saw about giving a man a fish and feeding him for a day?

The post goes on to highlight the patient and painstaking work of showing the Afghanis that they need to work together to overcome their differences; a carrot and stick operation it may well be, but I’m guessing it’ll do more good than training up and arming local militias, and then expecting them not to fall back into old habits once your back is turned. All depends on whether you want to give these people their freedom or to take control of it yourself, I guess.