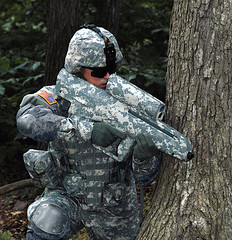 The US National Intelligence Council has published their quadrennial Global Trends Review, from The Guardian:

While emerging economies like China, India and Brazil are likely to grow in influence at America’s expense, the same cannot be said of the European Union. The NIC appears relatively certain the EU will be “losing clout” by 2025. Internal bickering and a “democracy gap” separating Brussels from European voters will leave the EU “a hobbled giant”, unable to translate its economic clout into global influence.

There’s some other interesting stuff in there. The Guardian points out that the tone is different from the last time the NIC report was published in 2004:

It was called Mapping the Global Future, and looked forward as far as 2020 when it projected “continued US dominance, positing that most major powers have forsaken the idea of balancing the US”.

That confidence is entirely lacking from this far more sober assessment. Also gone is the belief that oil and gas supplies “in the ground” were “sufficient to meet global demand”.

It’s interesting how quickly perspectives can change – and reaffirms how difficult it is to create near future science fiction.