Nostalgia ain’t what it used to be.  Originally coined in 1688 by a medical student investigating the tendency of Swiss mercenaries to become homesick to the point of physical incapacity, nostalgia soon changed from being a curable physical ailment to being an unassuageable psychological condition, a sickness of the soul.

This shift was the result of nostalgia being partly decoupled from the concept of homesickness.  Homesickness can be cured by allowing the sufferer to return home, but nostalgia came to signify a longing not for a particular place but for a by-gone age forever out of reach… short of someone inventing time travel.  However, despite becoming de-pathologised, nostalgia never quite managed to shed the negative connotations of its medical origins and the late 20th Century’s decision to turn nostalgia from a condition into a marketing strategy did little for its respectability in certain circles. END_OF_DOCUMENT_TOKEN_TO_BE_REPLACED 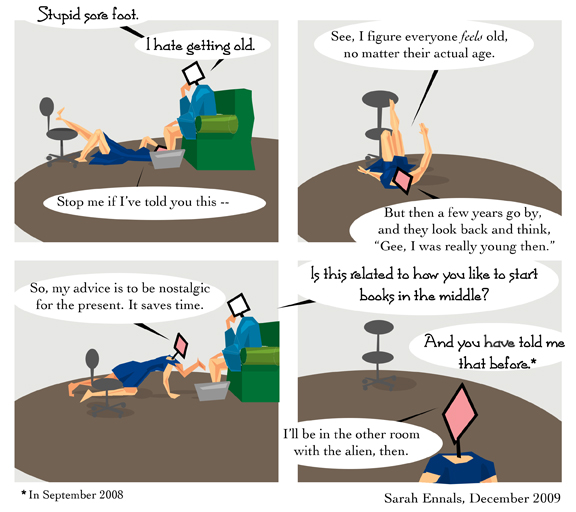 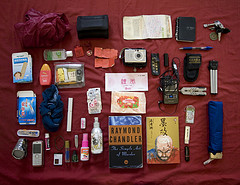 It is nice when someone points out the obvious fact that for most people, most stuff (i.e. consumer durables) is pretty good nowadays – at least compared with equivalent stuff from a long time ago. Whole Earth Catalog creator Stewart Brand discusses this is the 2008 World Question “What have I changed my mind about?” – he now believes that good old stuff sucks:

Well, I bought a sequence of wooden sailboats. Their gaff rigs couldn’t sail to windward. Their leaky wood hulls and decks were a maintenance nightmare. I learned that the fiberglass hulls we’d all sneered at were superior in every way to wood.

Remodeling an old farmhouse two years ago and replacing its sash windows, I discovered the current state of window technology. A standard Andersen window, factory-made exactly to the dimensions you want, has superb insulation qualities; superb hinges, crank, and lock; a flick-in, flick-out screen; and it looks great. The same goes for the new kinds of doors, kitchen cabinetry, and even furniture feet that are available — all drastically improved.

(New stuff is mostly crap too, of course. But the best new stuff is invariably better than the best old stuff.)

Novelist Ian Sales makes an interesting point – a lot of the stories and novels held up as classics of the science fiction genre are actually very bad adverts for the modern form:

I’ve complained before about the undeserving admiration given to many science fiction novels and short stories of earlier decades. Such reverence frequently results in fans recommending these works to people wanting to try the genre. And that’s not a good thing. Readers new to the genre are not served well by recommendations to read Isaac Asimov, EE ‘Doc’ Smith, Robert Heinlein, or the like. Such fiction is no longer relevant, is often written with sensibilities offensive to modern readers, usually has painfully bad prose, and is mostly hard to find because it’s out of print. A better recommendation would be a current author – such as Richard Morgan, Alastair Reynolds, Iain M Banks, Ken MacLeod, Stephen Baxter, and so on.

I think Sales has a good point there. I came to science fiction through the authors publishing in the eighties, and as such I’ve found that a lot of the classics are, while interesting from a historical perspective, pretty unfulfilling reads. And hell knows being made to read some of Dickens’ more tedious works at school gave me a knee-jerk reaction to literary classics, too. [Murray Leinster cover scanned by J Levar]

Which authors would you recommend to a reader wanting to dip their toes into the genre, and why?