I don’t know first-hand, as I don’t drive, but it doesn’t take superhuman empathy to imagine how hard the spiralling cost of diesel and petroleum is hitting a lot of people right now.

Time Magazine obviously came to the same conclusion, and decided to make an attempt at cheering everyone up by listing 10 things you can like about $4 gas. These range from the prospect of globalized jobs returning to their original locations to the more prosaic and obvious like less pollution and fewer traffic deaths.

If those aren’t enough for you, perhaps a piece at the New York Times will sell you on the idea. I mean, come on – who here doesn’t think an air-ship renaissance would be extremely awesome? [via BoingBoing; image by Torley Linden] 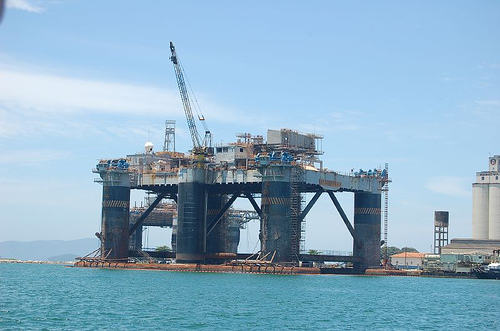 Today oil prices touched $100 a barrel for the first time in history, marking a growing important trend for the near future. Even when historic prices are adjusted for inflation the price has been very slightly higher (at $104.70 during the Iran revolution in 1980). Crude prices reached a high of $97 in November and then fell, only to rise again after the new year.

Peak oil, and the other associated peaks (peak food production, peak metals and peak coal, among others) are a real concern over the next fifty years. When I participated in the collaborative fiction project World Without Oil in May, I thought peak oil was an interesting problem for the future but I wasn’t expecting prices to jump from $50 in January to $100 today. Although oil is always a volitile market, it looks like we may be hitting the point where supply can’t keep up with the increased demand. In the end $100 is just a number but the trend of oil, gold and other commodities mean many of the conservations needed to combat climate change may be forced on us by price alone.