Chalk another one up for the MIT ideas factory: ‘programmable matter‘ comprises sheets of composite material “edged by foil actuators – thin, solid-state motors – that contract or expand when they receive an electric current from flexible electronic circuits embedded in the sheets. After they achieve their preprogrammed shape, the sheets are held in place by tiny magnets on the edges of the fold joints.” [via SlashDot]

Clever stuff. I wonder how far up you could scale this phenomenon? It could make Ikea furniture much less of a headache to assemble, for a start… and Cisco’s city-in-a-box could really be supplied in a box. 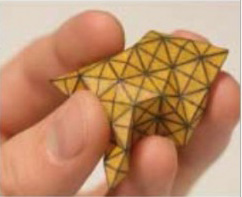 I’m intrigued by this report that members of the Japan Origami Airplane Association are working to develop a 3 inch paperplane that they’re hoping will handle reentry and land somewhere on Earth after being launched from the space station.

That would make for the longest paperplane flight ever!