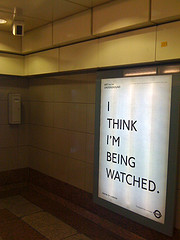 Ministers are considering spending up to £12 billion on a database to monitor and store the internet browsing habits, e-mail and telephone records of everyone in Britain.

GCHQ, the government’s eavesdropping centre, has already been given up to £1 billion to finance the first stage of the project.

Hundreds of clandestine probes will be installed to monitor customers live on two of the country’s biggest internet and mobile phone providers – thought to be BT and Vodafone.

The Home Office stressed no formal decision had been taken but sources said officials had made clear that ministers had agreed “in principle” to the programme.

This is such a horrifyingly bad idea I don’t know where to begin.

The question, to quote Elliot Carver, is why? Why does the government think this will make the world a better and safer place? Don’t they understand that terrorism isn’t about killing people with bombs, it’s about spreading the fear of people being killed with bombs.