I try to avoid reusing the headlines of articles I link to, but in this case I just had to let The Guardian‘s choice carry through, because it’s just too good to improve upon. The story: there’s an MMORPG in the pipeline that essentially models and recreates the European Parliament.

The game will allow players to gain points and move up levels by proposing legislation, amending laws, writing articles for an online newspaper and other tasks. The developers are in discussions with journalism schools and secondary school teachers to incorporate the game into teaching modules.

The game will allow for fictional pieces of legislation to be crafted and track real bills making their way through the European legislative machine. The game’s developers, the European Service Network, a Brussels communications agency that until now has mostly been responsible for producing EU brochures and websites, saw the popularity of online games such as World of Warcraft and thought they could make a sort of legislative Middle Earth out of the European parliament.

“It’s completely out of the box. It’s an experiment as a means of bringing together the best trends in the internet to stimulate discussion about Europe,” said ESN’s manager of the project, Ahmed ElAmin.

“World of Warcraft was one of the inspirations. It’s the biggest online role-playing game there is. It shows there is a huge audience for 3D online worlds.”

Well, yes, there is a huge audience for online 3D RPGs… but most of them involve goals and rewards of a more visceral kind than ramming through (or blocking) some obscure but important chunk of legislature. And I’m docking you ten points, Mr ElAmin, for your use of “out of the box”. Tsk..

Snark aside, it’s an interesting attempt to open up the mechanics of European democracy to the layman, and I think I’ll be giving it a look at some point (time permitting, natch). But it rather begs the question: once we reach a point where we can simulate a large-scale consensus democracy online, why the hell don’t we abandon the pretense of simulation and let it run that way for real? 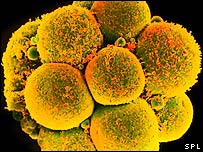 The UK parliament this week is considering a wide-reaching bill on stem-cell research. Under pressure from a number of religious groups, Prime Minister Gordon Brown has allowed MPs to have a ‘free vote’ on certain parts of the bill. There’s no doubt that stem cells are a tricky moral issue – are they to be considered alive, or just a group of cells like a skin transfusion?

Meanwhile, a study of stem cell use has shown that they can make a great deal of impact in reversing the effects and possibly curing Parkinson’s disease. Other degenerative diseases such as Alzheimers are also thought to be potentially cured by treatment with stem cells. The big advantage to this latest scientific discovery is that the mice in the study did not reject the stem cells, a major step forward in the useability of the treatment.

To be sure the issue is a very complex one. Is it better to not play around with cells taken from embryos, even those that would only be disposed of? Is it a can of worms best left alone or are the moral quandaries worth it for the difference that could be made to the many people with diseases stem cells are thought to help? It’s a difficult choice but one we’ll have to face in the coming decades. Scientists are making great advances in the field and sooner or later will produce cures for some diseases. We’ll have to choose whether it’s right to use them or not.