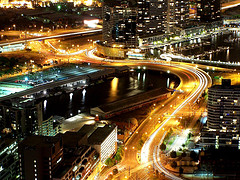 Many thanks to former Futurismic staffer and all-round top bloke Tobias Buckell for flagging up an interview with Paul Romer at the NYT Freakonomics blog, which pushed a whole bunch of my buttons at once. [image by geoftheref]

Romer’s big idea is that of the Charter City: a developing nation strikes a deal with one or more developed nations, providing a plot of land in exchange for the institutional stability of its partner or partners. A city-state is declared and built, policed and regulated by the foreign nation but populated by citizens of the developing nation who want to take a shot at a better life. Foreign investment pours in, as does population; the resulting nexus of stability acts as beacon and white blood cell to the rest of the developing nation, and to others much like it. Romer explains in more detail on his website:

Today’s world offers little chance for large-scale migration. The hundreds of millions of people who want to move to places with better rules aren’t allowed in. Charter cities will become the places where they can go.

Cities are the right scale for implementing entirely new rules. A coherent set of rules can let millions of people work together and create enormous value on a small tract of land. Because cities are also relatively self-contained, the internal rules in one can differ from the rules in all of its trading partners.

Urbanization is the key to the predictable transformation from an economy where most people earn a precarious living in subsistence agriculture (doing great harm to the environment in the process) to one in which most people work in manufacturing and services. The transformation is inevitable; current estimates suggest that an additional 3 billion people will move to cities this century.

The quality of their lives will depend on whether these are well-run cities with good rules, or dysfunctional cities with bad rules. Many people continue to move into urban slums with no running water, high crime rates, few steady jobs, and sewage in the streets. The embedded, interlocking systems of bad rules that lead to this type of dysfunction will be exceedingly difficult for existing cities to change from within.

A new charter city offers a speedier path to better rules. People who live there, even people who start out earning very little, can live in housing that is safe and sanitary, send their children to school, find work, and live free from fear of crime.

Now, this is a fascinating idea – the sort of thing that sets off little cascades of story ideas in my mind (which, based on past form, I’ll never get round to doing anything with until reality has rendered them redundant). I’ll say outright that I can see a lot of flaws in it (not least of which is the alarmingly totalitarian undercurrent implicit in the idea of a city into which many may legally arrive but few may leave – Berlin Wall, anyone?), but there’s a core of logic in there that rings true. The interview with Romer addresses some of the more obvious criticisms, and is well worth a read:

Freakonomics: Why will governments, particularly the entrenched, corrupt governments found in many countries, be willing to cede control of these zones?

Romer: First let me push back on an assumption that many people make and that seems to be implicit in your question. This assumption is that “bad guys” are why so many people are stuck living under bad rules. If you were a good guy and were the mayor of New York, would you be able to build enough consensus to implement congestion pricing for traffic, at least within our lifetimes? Or would you be strong enough to be able to coerce the people who don’t want it to go along?

Narratives about good guys and bad guys are always entertaining, but there is a deeper reason why people get stuck under bad rules. For those of us who live in the United States, it is easier to understand in a context like New York that is more familiar. It is quite possible that its existing political system will never allow an improvement like congestion pricing, and yet many people would happily move to a new city that had sensible pricing and smoothly flowing traffic at all hours of the day. Systems of rules are “sticky”; they are difficult for any leader or group to change.

Most of the “designed nations” that I can think of came to sticky ends or fizzled out early, but they tended to be more obviously (and naively) utopian in concept than Romer’s ideas, which seem to be a form of free-market capitalism tempered by a bit of common sense about human failings and the frailty of political and economic systems. Would charter cities work as Romer suggests, and help developing nations climb out of the poverty pit? I have no idea… and I guess the only way we’ll find out is if someone lets him build one.