We have three dogs: a golden retriever and two border collies. The border collies are wicked smart. I’m pretty sure that across some narrow bands they are smarter than we are. For example, they can manipulate us into behaving the way they want pretty effectively – they’re herding dogs, after all. Sometimes they’ll get us all gathered together before we even realize it. Other times we know, but they still manipulate us into doing what they want. They have to vary their techniques regularly to keep succeeding. I am a hundred percent confident that smarts, feelings, and sometimes a big chunk of creativity goes into their behaviors. END_OF_DOCUMENT_TOKEN_TO_BE_REPLACED 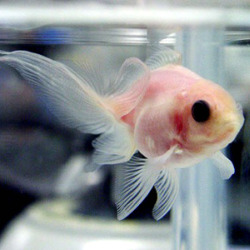 Every now and again, scientific research comes up with something that can be marketed beyond the laboratory circuit. Researchers at Mie University and Nagoya University in central Japan have just perfected the genetic manipulations required to make a transparent goldfish, and they’re hot on the tails of another group who developed a transparent frog a few years ago, which they’re now planning to start selling as pets. [image credit AFP, borrowed from linked article; contact for immediate take-down if required]

These transparent animals are a response to increasing pressure from animal rights groups over dissections, as they provide a rare opportunity to see the 3-dimensional arrangement of internal organs in a living creature… but who knows what demands might be created once these critters hit the pet stores? 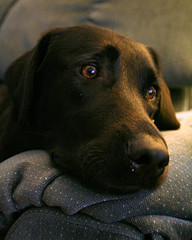 The recent hospitalization of a woman at the hands of her pet chimp has raised questions about the use of human psychiatric medicines in animals, after the victim’s initial (and now retracted) statement that the chimp had been given Xanax to control his agitation. Apparently it’s more common than I’d have expected:

As recently as the early 1990s, it was practically unheard of to treat animal behavior problems with drugs. Today it’s routine.

Prozac, for example, has been used in a few zoos to treat wild animals, including Johari, an adult female gorilla at Ohio’s Toledo Zoo that had been prone to violent fits.

But dogs and cats are by far the most common animals to be drugged to combat separation anxiety, obsessive-compulsive disorder, aggression, noise phobia, and other issues.

The majority of anti-anxiety medications given to animals are the same ones used for people, although in different doses.

There’s a whole ethical can of worms here, and the sensitivity of the subject is exacerbated by the closeness many pet owners have to their charges. The angle I’d tend to take is that I’m not entirely convinced that the drugs in question are the best solution to the problem in humans, let alone animals – psychiatric pharmacology has what appears to be an alarming obsession with treating the symptoms rather than the root causes, and pharmacology in general seems to promise cures when it can only deliver crude controls.

But even if we take the efficacy of anti-anxiety or anti-depressant drugs as a given, is it right to give them to animals? Who are we to judge their mental states as being in need of correction? I know for a fact that my mother – an animal owner and breeder since long before I was born – would be appalled at the idea of giving psychiatric drugs to animals to control their mood, as she would consider dysfunctional behaviour to be a direct result of poor training and care. [image by Phil Romans]

Furthermore, as George Dvorsky points out his responses to the article, it begs the question of whether we should own pets at all. I think most of us could agree that keeping a chimp as a pet is not just unethical but foolish, but what of dogs and cats? The more we understand about animal psychology, the trickier these questions become.