Not to go all new-age on you, but it is remarkable to consider that something as esoteric as quantum physics has been observed at work in biological processes.

University of Toronto physicist Greg Scholes has published in Nature the strongest evidence yet that photosynthesis itself uses “coherence,” or being in more than one place at a time:

The quantum wizardry appears to occur in each of a photosynthetic cell’s millions of antenna proteins. These route energy from electrons spinning in photon-sensitive molecules to nearby reaction-center proteins, which convert it to cell-driving charges.

Almost no energy is lost in between. That’s because it exists in multiple places at once, and always finds the shortest path.

“The analogy I like is if you have three ways of driving home through rush hour traffic. On any given day, you take only one. You don’t know if the other routes would be quicker or slower. But in quantum mechanics, you can take all three of these routes simultaneously. You don’t specify where you are until you arrive, so you always choose the quickest route,” said Scholes.

Scholes based his findings on studies of common marine algae. His University of Chicago colleague Greg Engel says “There’s every reason to believe this is a general phenomenon.”

These findings have implications for solar-cell and computer design, not to mention being something to wonder about.

[According to scientists, the Earth is by far the sassiest planet in the solar system by internets_diary] 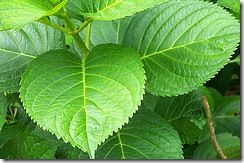 Our posts about genetic engineering always accrue some interesting comments, so let’s see what Futurismic readers think of this: researchers at the University of Illinois have engineered a new form of plant that produces more leaves and fruit without any need for fertilizers, by tweaking the enzymes used in the photosynthesis reaction.

Don’t get too panicked, though – the plant only exists in a computer simulation so far. And that’s the interesting question, as far as I can see – will we be more trusting of re-engineered life-forms if they’ve been tested exhaustively in virtual form before being created in the real world? [Link via Our Technological Future] [Image by 4x4jeepchick]