Ugh, Monday… if you’re feeling like I’m feeling, you could do with some light entertainment. Well, this should be just the ticket – especially for those of you a little jaded with the proliferation of barely defined yet still rapidly ubiquitous and cliché-ridden subgenres of fiction. You see, there’s a webcomic called Wondermark, and a few weeks back its creator drew the wonderfully cod-steampunk Electro-Plasmic Hydrocephalic Genre-Fiction Generator 2000.

Which is funny enough alone, but – the internet being the internet – someone else rapidly threw together the code to automate the procedure, allowing you to create your very own fake fictional framework at the merest click of a mouse. So go have a play – once my tasks for the day are complete I will be settling down to write a story entitled “The Cosmoblades”:

In a post-apocalyptic Aztec empire, a young wisecracking mercenary stumbles across an otherworldly portal which spurs him into conflict with a government conspiracy, with the help of a leather-clad female in shades and her reference book, culminating in eternal love professed without irony.

All the chores of theme and plot swept away, as by an unobtrusive yet efficient man-servant. Huzzah! [original comic seen via loads of people but initially via Jay Lake; automated version via MetaFilter] 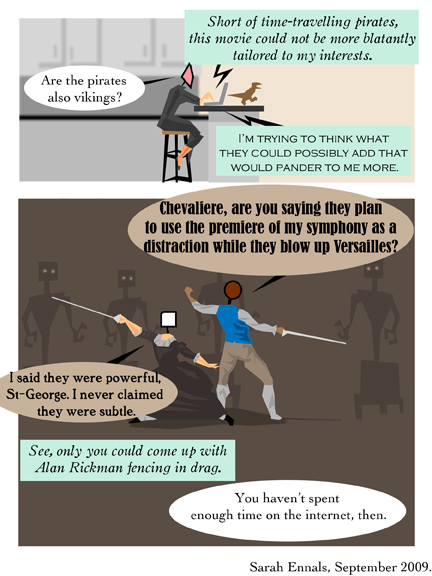 This should kill more than a few hours, be you a writer, reader, television obsessive or movie buff, rabid fan, or some combination thereof – the TV Tropes wiki is a user-contributed archive of tropes and plot ideas from literature, film and television, computer games … pretty much any form of entertainment media you can think of. Plus lots of amusing commentary on the nature of fandom, and the wiki’s community itself. Funny, informative and lo-fi – a winning combination, in my book. Discovered via Dinosaur Comics, which is a source of great jollity in its own right if you’ve got the right sense of humour.