Via Make. My Panterragaffe would, of course, only be used for occasions of post-apocalyptic high pomp and ceremony – mayoral crownings and triomphes, processions celebrating the subsumption of hierarchical economic systems, synthbrass salutes for visiting musical dignitaries, that sort of thing.

For getting around fast, however, it’s all about the RIOTwheel….

Seems like we’re all a little culturally obsessed with impending apocalypse at the moment; a minor flurry of end-of-the-world tales a few years back has grown into an everyman’s meme, with the cinemas full of zombie hordes, desolate wastelands and rugged survivors. That ubiquity has been a bit off-putting, to be honest… I love me a good post-apocalyptic story, but I’ve become a bit bored of them, and didn’t think we’d be publishing one here at Futurismic any time soon.

But Sandra McDonald has managed to prove me wrong, by subverting the cliches and turning the end of the world on its head with some darkly post-modern humour; “Tupac Shakur and the End of the World” is a post-apocalypse yarn for people who are bored of post-apocalypse yarns. Enjoy!

Tupac Shakur and the End of the World

The worst part – well, one of the worst parts, disregarding the collapse of modern civilization – is that it was my own stupid choice to leave Florida in the first place, and here I am spending my last days trying to get back there. I don’t have the Creep yet but let’s not pretend I’m special or mysteriously immune. I’m not the plucky heroine of a summer blockbuster who will find true love (shaggy-haired Brendan Fraser would be nice, or Daniel Craig with his icy blue eyes) and then become matriarch of a community of ragtag survivors. I’m just me – Susan Donoghue, thirty-one, former textbook writer, currently hiking down I-95 in North Carolina armed with a .45 handgun, pepper spray, and a hunting knife. I won’t let anyone touch me.

Let’s not pretend, either, that I’m on anything but a fool’s errand. My sister Marie, her husband Mike, and my baby niece Monica are probably already dead. The best I’ll be able to do is bury them. Take their hardened, Creepified bodies and put them in the dirt, then drop down beside them. END_OF_DOCUMENT_TOKEN_TO_BE_REPLACED 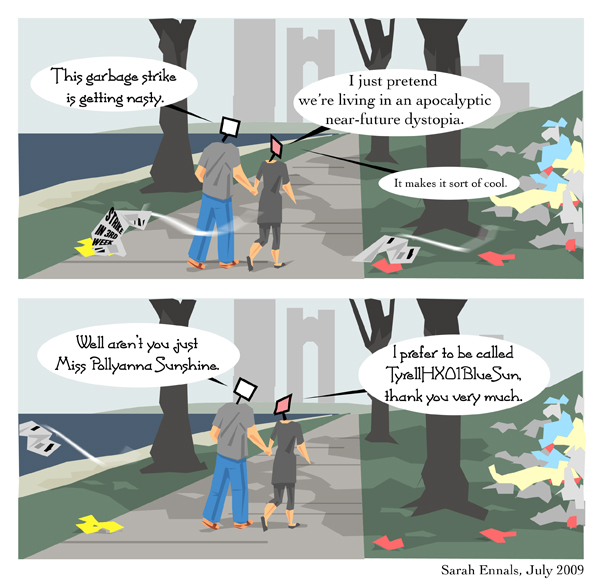