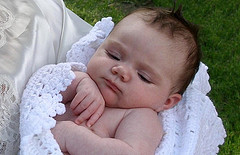 The better we get at sequencing and manipulating the genetic codes that make us who we are, the more inevitable it is that we find ourselves faced with opening the Pandora’s Box of eugenics. Indeed, you could argue we’ve already cracked the lid and peeked; this report from the European Molecular Biology Organization points out that screening unborn kids for Down’s Syndrome is a form of eugenics:

These abortions are eugenic in both intention and effect—that is, their purpose is to eliminate a genetically defective fetus and thus allow for a genetically superior child in a subsequent pregnancy. This is a harsh way of phrasing it; another way is to say that parents just want to have healthy children. Nevertheless, however it is phrased, the conclusion is starkly unavoidable: terminating the pregnancy of a genetically defective fetus is widespread. Moreover, because none of the countries mentioned above coerce parents into aborting deformed fetuses, these abortions—which number many thousands each year—are carried out at the request of the parents, or at least the mothers. This high number of so-called medical abortions shows that many people, in many parts of the world, consider the elimination of a genetically defective fetus to be morally acceptable.

There are plenty of other mutations that can be screened for as well, but the nature of the tests means they’re not done across the board:

However, such tests probably do not markedly decrease the mutational burden of a nation’s newborns. Usually, a fetus is only tested for a specific mutation when its family medical history indicates that there is a clear risk. If, as must often be the case, parents are oblivious to the fact that they are carriers of a genetic disorder, they will have no reason to undergo a prenatal diagnosis, which is both expensive and invasive. Fetuses are also not tested for de novo mutations. However, given that many—perhaps most—parents want healthy children, should all fetuses be screened for many disease-causing mutations?

To myself at least, the question’s a total no-brainer – of course they should. If science isn’t for improving the quality of life of as many people as possible, then what is it for? [via FuturePundit; image by Hammer51052]

But as we well know, not everyone would agree – and recent events have demonstrated the extreme measures people are willing to take to voice and defend that belief, despite the inherent hypocrisy of murdering someone you consider to be a murderer. Thankfully such extremists are a minority, but abortion remains an emotionally charged issue, especially where religion comes into the picture. Rational logic dictates that giving every parent the choice is the fairest compromise, but rational logic fails when one side of the debate uses an appeal to a higher authority to deny the right of choice to everyone, regardless of their belief set.

Unlike Creationism – which I’m unafraid to label as a provably delusional philosophy – the ethical borders in debates around eugenics and abortion are fuzzy, based as they are on spiritual ideas that cannot be measured and tested in the same way as the geological age of the Earth. I don’t think anyone who believes that abortion is a form of murder should be forced to have one against their will, but nor do I think that those people should be permitted to deny that choice to others, be it by legal force, intimidation or worse. Whether there is a solution that will satisfy everyone remains to be seen – but as genetic science progresses, the need to reach that compromise will become more urgent. Let’s just hope we can find it without further bloodshed.