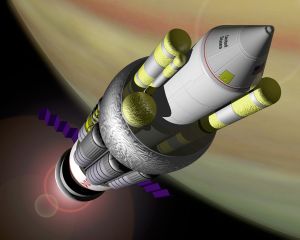 If you’re in need of something to bring a bit of excitement to your Tuesday (and let’s face it, who isn’t?), maybe you’d like to get involved with re-thinking the idea of launching space missions using the Project Orion model – in other words, the sixties concept space vehicle propelled by small nuclear explosions. [image courtesy NASA via Wikimedia Commons]

No, that’s a genuine NASA concept. And this is a genuine request; the following email turned up in the Futurismic contact inbox over the weekend from one Peter Queckenstedt:

“My name is Peter, I’m a Canadian designer, currently studying for my master’s in transportation design at the Umea Institute in Sweden.

I’m doing some advance work on my upcoming final degree project, and thought Futurismic might be able to aid me. My plan is to revive the idea of Project Orion, the atomic bomb-propelled ship designed in the 60s. My focus is not so much on the engineering side, but more on the ‘blue-sky’ ideas side. I want to explore what kind of changes 50 years of technology would make to this craft. My main intent is to get people excited about the idea of sending people into space in a serious manner.

If you know of anyone that might be interested in collaborating, sponsoring, or providing inspiration and input please let me know. Engineers, fiction writers, artists, mad scientists, bloggers … I’m open to anything as long as it’s interesting.”

There you have it, folks – if you fancy getting your crowdsource on and thinking about nuclear-powered rockets, now’s your chance! I think the best way to do this would be for you to leave a comment below if you’re interested in helping out, making sure to use a valid email address which I can then forward on to Peter.

But feel free to share ideas at the same time – for example, is Project Orion any more or less reasonable a suggestion now we’ve had five more decades of experience with nuclear power and weapons, not to mention the economic cost of space exploration?