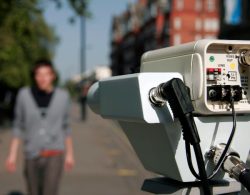 As a contrast to my earlier post about the cyclist panopticon being a positive manifestation of the potential of ubiquitous surveillance, here’s a project from the Royal College of Arts in London that rather neatly illustrates the flipside.

According to we-make-money-not-art, the Static Obesity Logging device:

… can be installed almost anywhere. The casing of the innocent-looking device conceals a computer, digital and analogue inputs and outputs and a camera. The system is able to remotely calculate Body Mass Index and communicate the data via wired and wireless networks.

Given recent hints from the UK government (among others) that they may start legislating against obesity, this is pretty Orwellian stuff. But the other of Benjamin Males’ projects is even darker – it’s a Racial Targeting System.

The [RTS-2] is a fully portable real-time image-processing platform that has the ability to automatically find and follow faces and then analyse and store their race data.

I guess we should be thankful that we’re seeing these devices being made by artists as a commentary on current affairs rather than reading about their deployment on the streets where we live.

That said, one can’t help but worry that what has been implemented by an art student is very likely to have been at least conceived of by our terror-fied governments. [story originally spotted at Hack-a-Day; image borrowed from Benjamin Males’ website]