Perhaps it’s because of the economy is beginning – finally – to pick up in the US. Perhaps it is because I’m sick to death of bad election-year politics, so I’m looking at anything else that comes along of interest. Maybe it’s even because I wrote about creative destruction the last time I did a column here, and I’m ready for the transformation that follows that practice. But I’m feeling a bit more hopeful this month, and I’m seeing signs that I’m not the only one. END_OF_DOCUMENT_TOKEN_TO_BE_REPLACED

You can’t turn a page or click a tab here in the UK without reading about the ongoing woes of the global recession, and I rather suspect the situation is similar for Stateside readers.

Thing is, the global recession isn’t quite so global as it looks from our standpoint in the “developed” West; via Tobias Buckell, here’s a piece at Foreign Policy that paints the nations of Africa as a golden investment opportunity – a far cry from the war-scarred deserts and shanty-towns of popular perception.

Africa, in fact, is now one of the world’s fastest-growing economic regions. Between 2000 and 2008, the continent’s collective GDP grew at 4.9 percent per year — twice as fast as in the preceding two decades. By 2008, that put Africa’s economic output at $1.6 trillion, roughly on par with Russia and Brazil. Africa was one of only two regions — Asia being the other — where GDP rose during 2009’s global recession. And revenues from natural resources, the old foundation of Africa’s economy, directly accounted for just 24 percent of growth during the last decade; the rest came from other booming sectors, such as finance, retail, agriculture, and telecommunications. Not every country in Africa is resource rich, yet GDP growth accelerated almost everywhere.

Toby goes on to do some back-of-the-envelope maths:

The world population is estimated to be 6.7 Billion.

Asia and India, both currently in growth patterns, represent 60% of the world’s population. Africa represents 15%. So 75% of the world is actually right now currently growing.

However most of Western Europe, parts of North America, and parts of South America are not. So it’s a global lack of growth for 25% of the world’s population.

There’s no denying that things are looking pretty grim economically for us Euros and Yanks, and that our problems are having a knock-on effect elsewhere. But rather than a global recession, perhaps what we’re seeing is simply a globe that doesn’t spin around us as the pivot point any more. Cold comfort for the myopic, I suppose, but I’m kind of relieved; we’ve had our time in the sun, but the sun hasn’t stopped shining just yet. 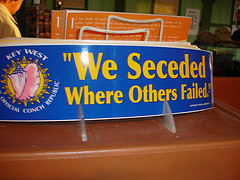 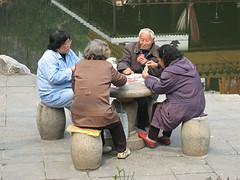 Periods of economic recession are bound to affect your health negatively, right? Well, not according to Christopher Ruhm, economics professor, whose research suggests that health actually improves in recessions:

In studies over the past 10 years, Ruhm has consistently found death rates decline during recessions and rise when the economy expands. If unemployment rises 1 percent, he estimates the death rate will fall by about half a percent.

“I tracked things like unemployment and mortality and found that they were almost a mirror image of each other,” Ruhm said.

Other researchers have found evidence of improved health during economic downturns in Cuba, Germany, Japan and Spain. Think of it as a silver lining — and perhaps a measure of how much our unhealthy lifestyles and workaholic tendencies can get the best of us during boom times.

Some experts remain skeptical, in part because of overwhelming evidence that people who lose jobs suffer poor health because of it. Depression, anxiety, drug and alcohol abuse, and anti-social behavior become significantly more likely after a person gets laid off.

As with so many articles of this type, there’s actually no conclusive proof either way. The causality of changes in the death rates is going to be affected by a multitude of interdependent factors, of which the state of the economy is just one (albeit a fairly significant and influential one). [via MetaFilter; image by SocTech]

That said, there’s a nugget of appealing logic at the core of Ruhm’s research. How much does the amount we work (and what we get paid for that work) really compensate us for the loss of what might be a somewhat spartan but more leisurely lifestyle? If the link was found to be explicit, what trappings of your current life would you be willing to sacrifice in exchange for a happier, healthier life? Or is this just another rehashing of Walden Pond for the modern age, a desperate grab for a silver lining in a cloudy sky?