Prosthetic limbs are still in their infancy, but there’s a lot of progress being made: Johns Hopkins Applied Physics Laboratory is working with Darpa (who else?), and has a research grant for trying out their mind-controlled modular prosthetic arm on five test subjects over the next couple of years [via SlashDot]:

Phase III testing – human subjects testing – will be used to tweak the system, both improving neural control over the limb and optimizing the algorithms which generate sensory feedback. The Modular Prosthetic Limb (MPL) is the product of years of prototype design – it includes 22 degrees of motion, allows independent control of all five fingers, and weighs the same as a natural human arm (about nine pounds). Patients will control the MPL with a surgically implanted microarray which records action potentials directly from the motor cortex.

Researchers plan to install the first system into a quadriplegic patient; while amputees can be outfitted with traditional prostheses, the MPL will be the first artificial limb that can sidestep spinal cord injury by plugging directly into the brain.

Great news, then, but it’s still a crude kludge compared to the original. Building a new biological limb from the ground up is way beyond our biotech capabilities as they stand… but our own bodies do a pretty good job of it when we’re developing in the womb, and young children can sometime regrow fully functional fingertips lost to accidents. So why can’t we make like salamanders and just sprout replacement limbs? It’s a vexing question, and extremely clever people are working hard to work out the answer. (You’ll have to go read the whole article, because it’s too full of proper science for one or two pulled paragraphs to do it justice.)

Well, obviously you can’t regrow your head and brain, but Planarian flatworms can… and the discovery of the gene that (probably) makes this possible has the media doing their customary pulp-sf extrapolation thing and suggesting (albeit sarcastically in the case of El Reg) that we’ll soon be able to grow ourselves a new bonce By Using Science [via SlashDot].

It has a certain Frankensteinian charm, I’ll admit… but surely it’d be marginally more useful to discover a gene that could regrow the rest of the body from the neck downwards? Or am I just falling into the trap of assuming that the nexus of consciousness (and hence personhood) is located between the ears?

Exciting results from the world of biology, with implications for human medicine: researchers looking at the limb regeneration process in salamanders have discovered that it works in a different way to what they thought previously. [image by jurvetson]

Rather than having their cellular clocks fully reset and reverting to an embryonic state, cells in the salamanders’ stumps became slightly less mature versions of the cells they’d been before. The findings could inspire research into human tissue regeneration.

“The cells don’t have to step as far back as we thought they had to, in order to regenerate a complicated thing like a limb,” said study co-author Elly Tanaka, a Max Planck Institute cell biologist. “There’s a higher chance that human or mammalian cells can be induced into doing the same thing.”

They found that salamander regeneration begins when a clump of cells called a blastema forms at the tip of a lost limb. From the blastema come skin, muscle, bone, blood vessels and neurons, ultimately growing into a limb virtually identical to the old one.

Researchers, many of whom hoped their findings could someday be used to heal people, hypothesized that as cells joined blastemas, they “de-differentiated” and became pluripotent — able to become any type of tissue. Embryonic stem cells are also pluripotent, as are cells that have been genetically reprogrammed through a process called induced pluripotency.

Such cells have raised hopes of replacing lost or diseased tissue. They’re also difficult to control and prone to turning cancerous. These problems may well be the inevitable growing pains of early-stage research, but could also represent more fundamental limits in cellular plasticity.

If Tanaka’s right that blastema cells don’t become pluripotent, then the findings raise another possibility — not just for salamanders, but for people. Rather than pushing cellular limits, perhaps researchers could work within nature’s parameters.

Another step towards transhuman immortality, perhaps? It’s fun seeing such science fictional subjects in ‘regular’ news venues, if only to watch journalists asking the sort of questions science fiction has always hinged on – like Khaled Diab at The Guardian, for example, trying to imagine what the world would be like if Aubrey De Grey is right about the immortality singularity:

I figure that, if it happens, we’ll work out a way to cope during the journey – much like Jamais Cascio suggests we’ll cope fine with intelligence augmentation, because it’s an iterative process rather than a momentary leap of change.

Of course, De Grey has already secured himself one form of immortality – the only form of it in which I’d be interested, anyway. I’m sympathetic to the transhumanist project, but the thought of living forever just doesn’t appeal to me. I’ve always theorised that without the ticking clock of mortality we’d have very little to motivate us to create anything new or unique; you struggle to produce a legacy to fill the void of your leaving, if you will. Of course, my attitudes may change as I get older… but even so, if offered the choice right now I’d settle for a standard lifespan minus the gradual decline into senescence and frailty at the end. Death doesn’t scare me, but dying slowly sure does.

This couple want a deaf child. Should we try to stop them? 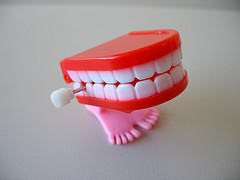 Another year, another “regrow your own body parts” story, this one coming from the ever popular domain of dentistry (a field which we have covered before on Futurismic). This time out, the Washington Post jovially informs us that wisdom teeth are a source of stem cells that could be used to regrow and replace missing teeth throughout our adult lives. [image by greefus groinks]

It’s a nuisance, but researchers are closing in on it. In fact, they think the tooth will probably be the first complex organ to be completely regenerated from stem cells. In part this is because teeth are easily accessible — say ahhhhh. So are adult stem cells, found abundantly in both wisdom and baby teeth — no embryos required, and your immune system won’t reject your own cells.

Nobody is predicting when the first whole tooth will be grown in a human, although five to 10 years is a common guess.

Only a decade to wait, then. But knowing dentists, they’ll probably still find a reason to assault your dignity, pain threshold and wallet all at once. Not that I’m bitter or anything. [via SlashDot]