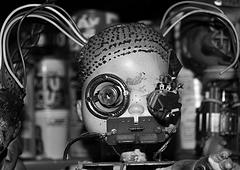 Lost an ear during the Reservoir Dogs Re-enactment Society meeting? No problems – we’ll just grow you a new one on a nanocellulose framework [via NextBigFuture]:

In the new programme, the researchers will build up a three-dimensional nanocellulose network that is an exact copy of the patient’s healthy outer ear and construct an exact mirror image of the ear. It will have sufficient mechanical stability for it to be used as a bioreactor, which means that the patient’s own cartilage and stem cells can be cultivated directly inside the body or on the patient, in this case on the head.

“As yet we do not know if it will work. It is an extremely exciting project that brings together expertise in image analysis, prototype manufacturing, biomechanics, biopolymers and cell biology. If we succeed it will open up a whole range of new and exciting areas of use.”

And while we’re speaking about ears, did you ruin your frequency response curve watching avant-noise bands play dingy bars and lofts in eighties New York*? You’ll be needing a hearing aid, then… but not some ugly uncool thing lodged in your ear canal. We’ve got one that’ll slip over one of your back teeth [via BoingBoing]:

There are other hearing aid devices that utilize bone conduction. Most, however, use a titanium pin drilled into the jaw bone (or skull) to transmit sound to the cochlea. SoundBite seems to be the first non-surgical, non-invasive, easily removable device. While they are likely years from retail production, Sonitus Medical plans on having SoundBite ITMs fitted to each individual’s upper back teeth and fabricated fairly quickly (1 to 2 weeks).

Oh, so all that wide-bandwidth noise and late-night hedonism has burned out some of your brain-meat, eh? Well, we’ve got organic transistors that mimic the function of human synapses [via NextBigFuture again]… though quite how we’d patch them into your existing wetware is a bit of a mystery at this point. But hey, they’re called NOMFETs, so the internet should find plenty of macro jokes to make about ’em!

A biological synapse transforms a voltage spike (action potential) arriving from a pre-synaptic neuron into a discharge of chemical neurotransmitters that are then detected by a post-synaptic neuron. These are subsequently transformed into new spikes, leading to a succession of pulses that either become larger or diminish in size. This fundamental property of synaptic behaviour is known as short-term plasticity, which is related to a neural network’s ability to learn. It is this plasticity that Vuillaume and colleagues have succeeded in mimicking.

In the NOMFET, the pre-synaptic signal is simply the pulse voltage applied to the device and the output signal is the drain current, explains Vuillaume. The holes – the charge carriers in the p-type organic semiconductor employed – are trapped in the nanoparticles and act like the neurotransmitters. A certain number of holes are trapped for each incoming spike voltage and in the absence of pulses, the holes escape in a matter of seconds

This time delay is carefully adjusted by the researchers by optimizing nanoparticle number and device geometry. “The output of the NOMFET is thus able to reproduce the deceasing or amplifying behaviour typical of a synapse depending on the frequency of spikes,” said Vuillaume.

Er… your health insurance is fully up to date, right? [image by Bistrosavage]

[ * Guess who’s been reading a Sonic Youth biography this week… 🙂 ]