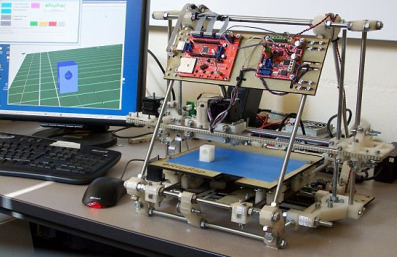 Via Michael Anissimov we hear that the second generation of the RepRap self-replication machine, codenamed “Mendel”, is nearly ready for public release. Meaning that you could buy one (if you found someone who’d sell you one), but you could also build your own from the free open-source plans found at the RepRap website; the parts will cost you around US$650. [image from the RepRap wiki]

While such homebrew 3d printers aren’t currently much use for high-detail work and commercial finishes (like reproductions of your favourite World of Warcraft critters, maybe), they can make functional devices without any major problems. If there really is an increase in demand, you could probably assemble a Mendel and set it up to simple print a copy of itself. Then set up the copy to do the same, get a few generations of fully-functioning clones built, and then start churning ’em out and selling them to local buyers…

Integrating electrical and electronic circuits into physical parts is beyond these current home fabbers, but where big industry leads the homebrew crew will follow. Xerox has just invented a conductive silver ink that works without the need for a clean-room environment, meaning you can print off circuits onto a flexible substrate just like any other continuous-feed document. It wouldn’t take much for someone to buy some of that ink and find a way to use it in cheap and/or homebrew kit… hey presto, you’ve suddenly got the capability to replicate the electronic parts of a more complex self-replicating machine.

So go a bit further, integrate the two functions, have one machine that can print both inert blocks and electronics. Now we’re cooking! Now shrink ’em down, maybe speciate them so that different versions are specialised toward specific types of printing or assembly. But you’ll need to train them to pass off tasks they can’t do onto a machine that can, so you give them some sort of rudimentary swarm intelligence that communicates over something like Bluetooth… and then all of a sudden you’ve got an anthill of mechanical critters that have learned to procreate, cooperate, and deceive. DOOM.

Yeah, I know, it’s not very likely – but allow a guy a flight of robo-dystopian fancy on a Thursday, why don’t you? 🙂 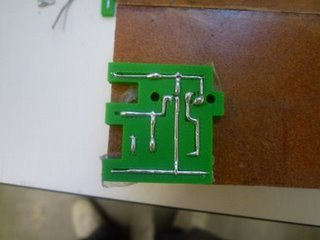