We mentioned this little lot in passing back in April, but given that they’re cropping up in UK headlines again (and that their modus operandi connects to last week’s discussion of reproductive licensing), I thought it worth mentioning again. I refer, of course, to Project Prevention, a US-based charity now operating in the UK whose ‘work’ involves offering drug addicts and other members of “the undeserving poor” £200 in cash in exchange for undergoing voluntary sterilisation.

I mention it primarily because it makes me think again about my position with regards to reproductive licensing; after all, is it not inconsistent of me to approve of reproductive licensing, if only as a principle with no obvious fair and corruption-proof method of implementation, but to be genuinely horrified by the crudely manipulative way that Project Prevention are approaching the same basic idea? It occurs to me that Project Prevention’s founders and staff probably believe quite earnestly that they’re working toward a social good, namely preventing the birth of children to parents unfit to care for them… but for them, that’s justification for a methodology that I find instantly appalling.

In other words, I’d like to say to Silvia and the other commenters on my post from last week: I think you were right. There may well be a logical core to the idea of restricting reproductive rights, but like many logical ideals, it can’t be brought into the messy sphere of human life without turning into a value judgement that no one has the right to make over someone else. A better – if admittedly harder – solution would be to work towards a society where the root causes of bad parenting are eradicated, rather than bad parents themselves; a utopian dream, perhaps, but a far more humanist one.

Kyle Munkittrick’s at it again over at Discover‘s Science Not Fiction blog, this time raising an ethical question that has intrigued me ever since I encountered it in an assortment of science fiction stories and novels as a teenager: should the right to reproduce be subject to licensing*?

Cue knee-jerk horror and accusations of fascism-by-the-back-door… but Munkittrick makes some points worth considering. First of all, we already have a limited form of licensing with respect to child-rearing: adoption.

If you can have children naturally, you’re free to have as many as you want and basically do what you want with them. The only exceptions are parents so horrible that the state steps in and takes them away. If you can’t or don’t want to have children naturally, then not only do you have to go through the difficult and complex processes of adoption and/or ARTs, you have to be approved to do so. It’s double-damage on the equality front. Our society, it would seem, unconsciously believes “If you’re naturally able to have kids, then it’s OK for you to have kids. But if you aren’t able to naturally have kids, there might be something else wrong with you, and you should be investigated.” That kind of mindset is wrong – your ability to have kids is not an indicator your ability to take care of them.

He goes on to point out that all that’s realistically needed is a test of basic competence, just like you take to get a driving license:

The main problem that I can see is that by setting up a framework intended to screen only for basic competence, you’re leaving a legacy system to the politicians of the future which could be tweaked and adjusted for more fascistic ideological purposes. Not to mention the fact that any bureaucratic system of the complexity required to license parenting in a country the size of the UK would inevitably be highly susceptible to gaming, fraud and bribery…

Ultimately I’m somewhat hesitant to pick sides on this particular issue, despite what seems to me the very logical appeal of the idea; this is because I have no intention of ever having children, and as such I can’t fully understand the incredibly powerful emotional responses that parenthood – and, in some sad cases, the inability to achieve parenthood – engenders in people. How can I deny someone else the right to do something that I’ve never wanted to do?

That said, the logic seems fairly clear to me: surely the worst thing that we could do to any child is allow it to be raised by parents either unwilling or incapable of caring for it properly? As Munkittrick points out, almost anyone can conceive a child, but evidence suggests that not everyone can raise one. So whose rights must take primacy – the right of every human being to reproduce if they’re able and willing, or the right of every child to be raised responsibly? Given that the child doesn’t get a choice about whether it gets born or not, I see it as being the underdog in the equation, and hence more deserving of protection.

Where do you folk stand on this one? Particularly interested in input from parents, would-be or actual.

[ * I feel Julian May’s Galactic Milieu books dealt rather well with this issue, in that she was careful to simply portray such a system in action, warts and all, good and bad, without passing any authorial judgement on its ethical validity. Recommendations of other stories or novels that deal with similar subjects would be most welcome! ] 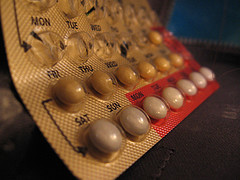 Here’s another bioethics question that’s probably no less contentious than the deaf baby issue. Thomas Beattie is legally married to a woman called Nancy. Nothing unusual there; what’s unusual is that Thomas is transgender – he’s now legally counted as a man, but was previously female. So far, so good.

“Sterilization is not a requirement for sex reassignment, so I decided to have chest reconstruction and testosterone therapy but kept my reproductive rights. Wanting to have a biological child is neither a male nor female desire, but a human desire.”

In this instance, I find my own attitudes very clear cut – I have no problems with this at all. But I imagine the anti-gay-marriage crowd will be pretty upset about it, which brings us to a question familiar to transhumanist thinkers and readers of feminist science fiction alike – is “gender” a function of genetics, of psychology or of society? [via BoingBoing]