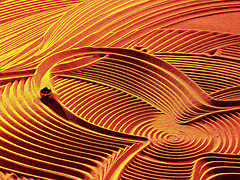 Researchers in Hong Kong are developing technologies that could one day lead to hidden portals [1]:

In the research paper, the researchers from the Hong Kong University of Science and Technology and Fudan University in Shanghai describe the concept of a “a gateway that can block electromagnetic waves but that allows the passage of other entities”
…
The gateway, which is now much closer to reality, uses transformation optics and an amplified scattering effect from an arrangement of ferrite materials called single-crystal yttrium-iron-garnet that force light and other forms of electromagnetic radiation in complicated directions to create a hidden portal.

Previous attempts at an electromagnetic gateway were hindered by their narrow bandwidth, only capturing a small range of visible light or other forms of electromagnetic radiation. This new configuration of metamaterials however can be manipulated to have optimum permittivity and permeability – able to insulate the electromagnetic field that encounters it with an appropriate magnetic reaction.

Whilst I’m not entirely sure how this metamaterial in supposed to behave, or what is meant by “other entities” in this context, such a substance has overtones of the Ringworld construction material described in Larry Niven‘s Ringworld series, which IIRC was impermeable to 40% of neutrino emissions, and under the application of a particular instrument would allow people to walk through it.

[1]: The article is somewhat vague on how exactly this portal will work in reality, but I gather that it works either like a perfected “holographic mirror” that you can walk through, or else simply a glass-like sheet that can become reflective when required to. In any case