Alex Knapp picks up on the story about Foxconn’s plans to draft in a cool million robots for their manufacturing plants within three years, and ponders whether this is good news for the unemployed in the West:

A good portion of this move to robotics labor has, no doubt, to do with labor costs and the reports of working conditions in FoxConn’s factories in China. I do wonder, however, what this means for the future of outsourcing to Asian markets, though. If labor costs can be reduced by employing more robots in the factory, and if its feasible for a company like FoxConn to use such a large number, it begs the question of why Western companies might continue outsourcing.

One of the major reasons, after all, that companies are outsourcing their operations to Asia is for the labor costs. If those labor costs can be obviated by greater automation, then other considerations come into play. After all, America and Europe are still where most of the customers are, and with the price of oil on the rise, cheaper transportation costs might come into the mix. Moreover, with both Europe and the United States teetering on the brink of another double-dip recession, policies geared towards bringing manufacturing home via tax incentives and other measures are more likely to become law.

Hmm. Even allowing for the traditional hyperbole of corporate press releases, a million automated machines will displace a whole lot of jobs. But Knapp is far more confident than I am about governmental willingness to pass laws that make demands of their corporate paymasters, let alone ones they’d actually be obliged to adhere to; the geographically-bound nation-state has no leverage on the transnational corporation, and the only incentive you can offer them is a taxation low-ball and further erosion of worker’s rights. In other words, sure, you might get manufacturing returning to the West, but it’ll only happen because labour costs have equalised… and that’s only going to happen in places where you’ve carefully created a huge stock of labour that doesn’t have any other options. Sweatshop USA… it’s a sign of how bad things are if you can count that as a victory condition.

And to extrapolate further, the rapid maturing of fabrication technology is going to obsolete a lot of more complex machinist gigs, too. They may well be countering fabbers and sinterers among the Foxconn “robot” list, of course, though the article mentions more simple stuff – welding, spraying, low-level assembly, which are exactly the sorts of jobs that robots have traditionally obsoleted before. I watched pick’n’place machines and surface mount technology completely gut the electronics assembly industry here in the UK back in the nineties, and less than a decade ago it was already cheaper for one company I know of to source components internationally, ship them to the UK for collation, ship them out to Thailand for assembly and then back again for QA and (extensive) rework, than it was to pay UK workers to do the full process locally. That sort of price margin isn’t going to be significantly eroded by concessionary tax rates, though increased transportation costs will admittedly contribute as well.

I think if there’s anything to take away from this inexorable slide toward nigh-total automation, it’s that we can no longer sustain a global economy that relies on mass employment in the manufacturing industry to keep the money moving. I suspect there’s a tipping point in the near future (or possibly in the recent past) at which – barring existential-scale disasters that knock us back into pre-industrial ways of life – it will never again be cheaper to get humans to build things than it is to get machines to do the same work.

What happens after that point to the business models of tchotchke makers and Next Big Thing gadget creation, I have no idea… and the more economists and politicians I listen to, the more I suspect that no one else has a bloody clue either. If anyone can show me how this *isn’t* a big old zero-sum game that’s going to hit a brick wall sometime soon, please pipe up and do so.

A reminder (if such were needed) that technology is a double-edged sword: while remote-controlled tech can be used to kill, it can also be used to save lives, as demonstrated by the first successful remote-controlled robot heart surgery procedure, performed earlier this week in London [via SlashDot].

Since I chose to write about things made of metal skins and electrical guts in November, and then about warm-blooded carbon-based life in December, I couldn’t resist a combination. I call it the tender mash-up because the fusion of man and machine might result in an emotional being with a huge leap forward in physical capacity. The popular television and movie characters Robocop and The Six Million Dollar Man may be coming close to reality. END_OF_DOCUMENT_TOKEN_TO_BE_REPLACED

I’ve been invited to join a panel on robotics at the upcoming Orycon Science Fiction Convention, so I decided to write about them here, too.  I also have a story coming out soon in Analog, called “The Robots’ Girl,” which started when I read an article complaining about robots being developed to help with childcare in Japan.

We were promised undersea cities and jet packs and household robots.  The robots are here, and the next decade is pretty clearly a breakout time for them. END_OF_DOCUMENT_TOKEN_TO_BE_REPLACED 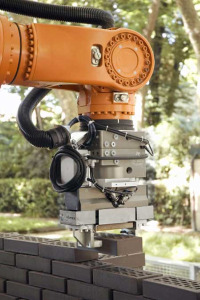 Via Chairman Bruce comes bad news for anyone hoping for a lasting career at the manual-labour end of the construction industry. A trailer-mounted bricklaying robot (imaginatively named “R.O.B.”) will be building its second stylishly curved wall on Pike Street, New York later this year. [image lifted from linked post at Dezeen]

OK, so it’s a little large and ungainly at the moment (and probably has a price tag to match), but that will change – plus it won’t take breaks, go home to sleep, wolf-whistle at passers-by or attempt to form a union, which will doubtless add hugely to its appeal to corporate buyers.

Perhaps you’re thinking that concrete-and-rebar specialists will still be able to find work? Don’t forget that buildings can be 3d-printed now, too…