This is another one of the arms races of evolutionary psychology, I suspect; the smarter advertising becomes, the more resistant to its more basic forms we’ll get. Or maybe that’s wishful thinking… after all, the only reason there’s money in spam emails is because people are stupid enough to click on the damned things.

Just in case you thought Tom Maly’s speculations about fabrication tech eradicating Fed Ex were a stretch too far, and that the technologies required are no where near ready… well, you might have a point. But even so, 3D technologies are developing rapidly and cheaply, as demonstrated by some people from Cambridge University who’ve written software that allows a common or garden webcam to scan three dimensional objects in realtime as you turn them in your hand:

ProFORMA uses a fixed video camera to allow on-line reconstruction of objects held in a user’s hand. Partial models are generated very quickly and displayed instantly, allowing the user to plan how to manipulate the object’s pose in order to generate additional views for reconstruction. We demonstrate how augmented reality can be used to assist the user in view planning, guiding the user to collect new keyframes from desirable views in order to complete and refine the model.

Yeah, sure, it looks a little janky and lo-fi. The point is, ten years ago it would have been pure speculation; so where might we be in another decade? 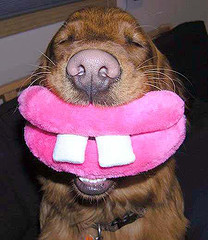 Dovetailing neatly as it does with yesterday’s mention of machines that can read emotion, I couldn’t resist mentioning this story about Japanese railway staff having their smiles scanned and rated out of 100 every morning before work:

For those with a below-par grin, one of an array of smile-boosting messages will op up on the computer screen ranging from “you still look too serious” to “lift up your mouth corners”, according to the Mainichi Daily News.

Workers at Keihin Electric Express Railway will receive a print out of their daily smile which they will be expected to keep with then throughout the day to inspire them to smile at all times, the report added.

Nothing looks more awkward – or alarming – than a forced smile. [via SlashDot; image by cutglassdecanter]

Have you ever fancied playing Google for the afternoon? How about starting your own book-scanning project?

If you’re thinking that’s too far out of your price-range, think again – as an entry to a contest on Instructables, a chap called Daniel Reetz built his own automated book scanner, predominantly using stuff he found in dumpsters alongside some cheap digital cameras. 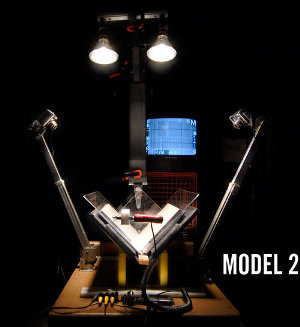 OK, so even if you could get the parts, the techniques might be a bit beyond the reach of those of us who struggle to change a bicycle tyre… but that’s a pretty impressive display of resourcefulness and ingenuity on Reetz’s part. I wonder if he’ll let me borrow it in exchange for scanned copies of every book I own? [via Hack-A-Day] 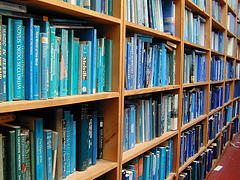 The fat lady hasn’t yet sung for Google Booksearch. Just a few days after the announcement that the Big G had settled with the author and publisher associations to pay them a fair price for online access to digitised books, Harvard University is dropping out of the program:

“As we understand it, the settlement contains too many potential limitations on access to and use of the books by members of the higher-education community and by patrons of public libraries,” Harvard’s university-library director, Robert C. Darnton, wrote in a letter to the library staff.

He noted that “the settlement provides no assurance that the prices charged for access will be reasonable, especially since the subscription services will have no real competitors [and] the scope of access to the digitized books is in various ways both limited and uncertain.”

As TechDirt points out, the settlement looks good at a first glance, and has probably mollified a lot of writers and publishers, but it actually gives Google a tighter hold on the content:

Rather than making the world’s information accessible and findable, this move is an attempt to lock up the world’s information in Google’s proprietary format, so that Google can charge people for it. It sets in place a forced business model that actually diminishes the potential usefulness and value of books, and sets a bad precedent for just about everyone else.

So it would seem that by clamouring for short-term advantage, the publishers and libraries may actually have lost the long game. We’ve not heard the last of this, I’ll wager. [image by Dawn Endico]