When I imagine what life will be like in ten, twenty, or thirty years time one of the few things I’m pretty certain of is that every flat surface will eventually turn into a video screen of some kind (and will probably be used to advertise stuff).

And here we have an early example of this trend from Esquire magazine:

To commemorate Esquire’s 75th Anniversary, we have published an experimental limited-edition of the October 2008 issue that features something called electronic ink, with moving words and flashing images … It is available at some major bookstores and newsstands.

The most elegantly-described science fictional use of electronic ink-like display technologies that comes to mind are the “mediatrons” in Neal Stephenson’s Diamond Age. Described here:

…a thin film of nanobar coupled with a layer of rod-logic nanocomputers and light filters to produce a flexible graphic displayer in the form of a piece of paper, a poster or even wallpaper. Cheap and plentiful, with a higher pixel-count than the human can resolve…

According to the information provided by Esquire we’re not at this stage yet, with the whole setup requiring elaborate arrangements to manufacture.

A helpful individual has created a flickr set showing detailed photographs and detailed video of the limited edition magazine. 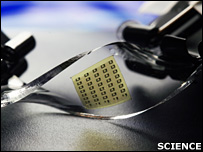 A couple of neat new advances in computing this week. The first is an amazing flexible silicon chip designed by US researchers. The components of the chip are applied onto a thin layer of plastic, at first glued down to a substrate. When the circuit is completed, the glue is disolved and the plastic peels away a flexible chip. The researchers think that removing the traditional blocky form of a chip allows the bendable material to be used in many new applications such as brain implants or smart clothing.

“Silicon microelectronics has been a spectacularly successful technology that has touched virtually every part of our lives,” said Professor John Rogers of the University of Illinois at Urbana-Champaign. “In many cases you’d like to integrate electronics conformably in a variety of ways in the human body – but the human body does not have the shape of a silicon wafer.”

Meanwhile, Japanese scientists working on the developing technology of printing circuitry like an inkjet printer have developed a technique they believe is good enough to print TFT computer monitors. With all the components of a computer getting smaller and easier to manipulate, the days of the traditional shape of a desktop tower are surely numbered…

[ image and stories via BBC technology]