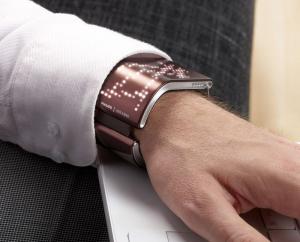 “Curb your enthusiasm” seems to be the message of a new gadget from Philips Electronics and the Dutch bank ABN AMRO. They decided to collaborate on the “Rationalizer” bracelet system “after research confirmed that day traders sometimes act irrationally because their actions are affected by their stress level and powerful emotions such as greed or fear.”

The Rationalizer consists of an “EmoBracelet” and an “EmoBowl” and incorporates sensors and signal processors designed by Philips. The EmoBracelet’s galvanic skin response sensor measures the level of emotional arousal in a similar way to a lie detector. The result is displayed on either the bracelet or the EmoBowl as a light display that intensifies and changes to reflect the wearer’s intensifying emotional arousal. At the highest emotional stress level the display has a greater number of elements moving at higher speed, and the color changes to a warning red.

The video is pretty entertaining. Yes, it does look like a phildickian update of the old mood ring. And it’s not just for day traders willing to admit that they sometimes get carried away.

Senior Director at Philips Design Clive van Heerden said emotional sensing was becoming more important in today’s digital world. He also believes there are many other possible applications, such as game controllers, intelligent cameras to interpret social situations, or even dating sites that enable you to tell who is attracted to you.

Also, you have to love the name of the division of the bank that worked on this device: the Dialogues Incubator.