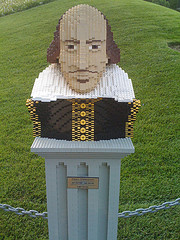 Remember me raising the spectre of plagiarism last week with regard to J K Rowling? Well, here’s a neat counterpoint via TechDirt; the people at GrokLaw have sat down and tried to work out how many lawsuits Shakespeare’s King Lear would garner were it published under the same system of copyright law as exists in the US today:

How many lawsuits do you see? At least a half dozen? I even see some methods and concepts claims, if we view it with modern copyright owner eyes. Remember J.K. Rowling’s litigation over methods and concepts that Darl McBride and Chris Sontag cited? I suppose he could have raised a transformational fair use claim. But what if he accessed the prior works in digital format? Does fair use exist there? Or maybe they’d have been DRM’d. He’d maybe then never have read them.

Of course, what really would have happened is there never would have been a King Lear written. It would have been too legally risky. You can go to jail for copyright infringement, after all, even if you are noncommercial, if you distribute a DVD, and if we are imagining, let’s imagine Shakespeare did that. Shakespeare wasn’t even noncommercial. And there are criminal sanctions under regular Copyright Law, too.

If Shakespeare had plenty of money, he could have contacted all the copyright owners and paid them whatever they asked, but if he didn’t have enough money, the result would have been he would have been unable to afford to write King Lear. Do we want a world where Shakespeare can only write King Lear if he has money? If you think I exaggerate, remember what happened to internet radio? And if one song is worth $80,000, is the sky not the limit, if you are a copyright owner and hold all the legal cards and can get Congress to keep upping the ante to suit you?

As the last paragraph suggests, the full piece is a partial response to the Jammie Thomas/RIAA case, but it highlights the same risks I mentioned last week as regards plagiarism suits against authors. [image by ryanrocketship]

As a supplement to that, via The Valve comes an essay at Harpers by Jonathan Lethem, which I guess I must have missed last time round. It’s a lengthy, beautifully written and eloquent defence of plagiarism in a postmodern media world, in which he points out that almost every big media company who fights against perceived plagiarism actually owes their success to it. You should go and read it.

In a courtroom scene from The Simpsons that has since entered into the television canon, an argument over the ownership of the animated characters Itchy and Scratchy rapidly escalates into an existential debate on the very nature of cartoons. “Animation is built on plagiarism!” declares the show’s hot-tempered cartoon-producer-within-a-cartoon, Roger Meyers Jr. “You take away our right to steal ideas, where are they going to come from?” If nostalgic cartoonists had never borrowed from Fritz the Cat, there would be no Ren & Stimpy Show; without the Rankin/Bass and Charlie Brown Christmas specials, there would be no South Park; and without The Flintstones—more or less The Honeymooners in cartoon loincloths—The Simpsons would cease to exist. If those don’t strike you as essential losses, then consider the remarkable series of “plagiarisms” that links Ovid’s “Pyramus and Thisbe” with Shakespeare’s Romeo and Juliet and Leonard Bernstein’s West Side Story, or Shakespeare’s description of Cleopatra, copied nearly verbatim from Plutarch’s life of Mark Antony and also later nicked by T. S. Eliot for The Waste Land. If these are examples of plagiarism, then we want more plagiarism.