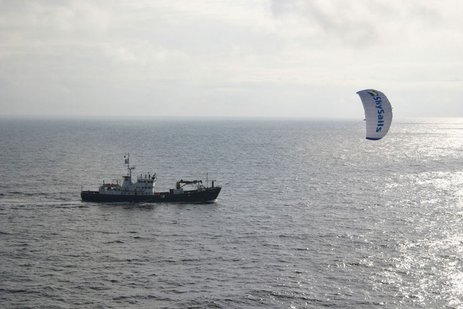 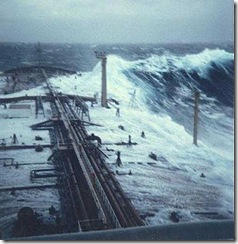 Sailors have told tales for centuries of giant waves arising in calm seas and swamping boats unlucky enough to get caught in them. Scientists knew better, of course, and said such stories were simply myths–until recent studies confirmed that these giant rogue waves not only exist, they exist in higher numbers than anyone expected.

The photo above is a rare image of a rogue wave, taken by first mate Philippe Lijour aboard the supertanker Esso Languedoc during a storm off Durban in South Africa in 1980. The mast at far right stands 25 metres above mean sea level; mean wave height at the time was between five and 10 metres. The wave approached the ship from behind before breaking over the deck, but caused only minor damage. (Image: Philippe Lijour via ESA.)

Now a researcher at the Universidad de Alcalá in Madrid, in collaboration with the German research centre GKSS, has come up with a software tool that can allow ships to detect approaching giant waves in time to prepare for their arrival. (Via ScienceDaily.)

The same tool may also have environmental uses: it could be used to predict the exact trajectory of oil spills, for instance.

Meanwhile, somewhere an Ancient Mariner is muttering, “Told you so.”

Here’s a column I wrote on rogue waves a few years ago.