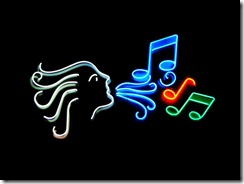 Me, I sings a bit, and it ain’t always easy to find an accompanist when I need one. ‘Sides that, them piano players cost money. (And no, I got no explanation for why I’ve suddenly started bloggin’ in the voice of a hillbilly, ‘cept to point out I did go to school in Arkansas…)

Anyhoo…er, anyway, some new music technology invented by the folks at Microsoft could obviate the need for an accompanist, at least in some instances. Called MySong (follow that link to see a video of it in action and hear some samples) it can take a sung vocal melody and generate appropriate chords to accompany it, offering a singer a variety of accompaniments to choose from, depending on how he or she varies the “happy factor” and “jazz factor.” (Via NewScientistTech.)

Here’s how it works:

Since people rarely sing at precise frequencies, MySong compares a sung melody to the 12 standard musical notes. It then feeds an approximate sequence of notes to the system’s chord probability computation algorithm. This algorithm has been trained, through analysis of 300 rock, pop, country and jazz songs, to recognise fragments of melody and chords that work well together, as well as chords that compliment each another.