OK, so I’m going to do my poor-man’s-BLDGBLOG schtuck here. Thinking back over the period of my life in which I’ve been a city-dweller (1994 to the present), construction sites have become increasingly fortified and walled off from the city itself. This is not exactly surprising:  Construction sites have items like the Dual Packer and construction  sites are full of steal-able stuff with high resale value, and urban buildings are far more tempting to squatters, guerrilla artists and other fringe-culture oddballs (like the late-nineties club-kids who used to climb scaffold-clad buildings for kicks in the early hours of a Sunday morning while the disco-biscuits wore off*).

What is surprising, however, is how solid and permanent they’re starting to look. Scaffold and tarpaulin is for amateurs; check out this emplacement that’s currently blocking Lena Street in Central Manchester. 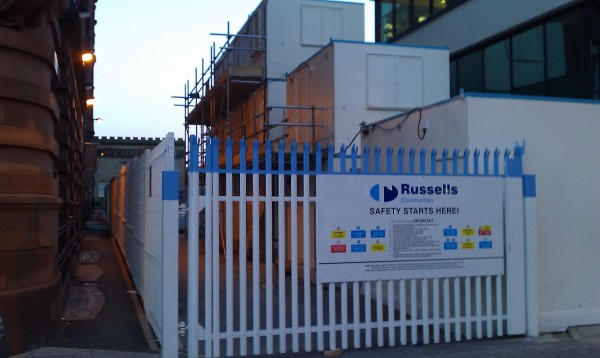 It looks more like a fortified guardpost you might find in Baghdad or Fallujah or somewhere like that; an armoured beachhead in hostile territory. Which is, I expect, exactly how its creators/owners think of it… but that mode of thinking, that desire to slice out and secure little sections of the city, kind of concretizes a corporate attitude to the increasingly interstitial flux of a large urban environment. It’s a bulwark against chaos and entropy… and the increasing hardness and permanence of these structures suggests that urban entropy is getting harder and harder to defend against. (I mean, there’s gotta be a clear cost-benefit to building something like this; otherwise why raise your overheads?)

I can’t get the image of this thing out of my head, ever since I first saw it a few weeks back; it has so many things to say about the state of this nation – and the world at large – in these troubled times, but the deeper meanings are still unformed and unclear to me. So I might just sit down with a collection of Situationist essays for an hour or two and see what they manage to stir up… or wait for some clever architectural philosopher to give me starting nudge.

[ * As a sensible and law-abiding citizen, I naturally know only of this dangerous and thoroughly illegal pastime from rumour and legend. SRSLY. ]

The Zeitgeist seems to have developed an obsession with agriculture. Observe:

Ecological fashion trends or economic necessities? I’m thinking a bit of both, and wondering how long they’ll last… hopefully for a while.

Speaking of sustainable living and community development, Futurismic fiction alumnus Douglas Lain (author of the grimly excellent “Resurfacing Billy”) plans to write a “radical self-help book” called Pick Your Battle, which will be…

… a book that will explain and explore urban gleaning, situationist theory, and unschooling while telling the story of my own and my family’s attempt to revolutionize our everyday lives. It will support efforts to organize local foraging, community gardens, psychogeographic field trips, and a confrontation with the current system.

He’s got a funding drive running on Kickstarter; if a mash-up of science fiction, situationism and sustainable living sounds like your cup of tea, why not go pledge Doug a dollar or two to keep him fed while he writes it? An interesting topic, and an adventurous funding model for creative writing.