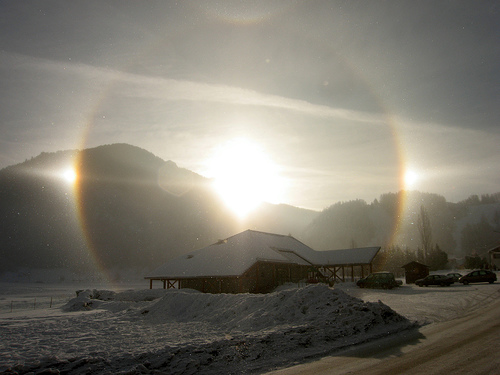 Two of the major criticisms of global warming theory I’ve seen recently have been that a) 1998 was actually the hottest year on record and since then it’s been cooler and b) that solar winds and cosmic rays are driving the climate change process, not human emissions.

These are valid points and scientists have been spending a lot of time researching their impact. Lancaster University have just released a major report on the latter, concluding from 20 years of data that global temperatures have little influence from solar activity. The original hypothesis, by Danish scientist Henrik Svensmark, hypothesized that when the 11 year cycle of solar wind is weak, more cosmic rays make it through the earth’s atmosphere, making more clouds and cooling the earth. Correspondingly, when solar wind is strong, Svensmark’s theory expected more global warming. However, with solar winds currently near their minimum, global temperatures are still high. The Lancaster study used three different experimental methods to find little correlation between the two, contradicting Svensmark’s theory, which was heavily cited in the documentary ‘The Great Global Warming Swindle’.

Related to this discussion is the citing of 1998, the hottest year on record, as proof that global temperatures are going down. This is a compelling argument on the surface but when you look at other global weather patterns the reason for the difference in numbers becomes apparent. 1998 was incredibly hot in main part because it was in an El Nino cycle, in which the warming of the Pacific Ocean disrupts weather patterns. Today however, we are in the midst of a significantly strong La Nina event, the sister condition that dampens global temperatures. This means that whilst it will still likely be in the top ten hottest years, 2008 will not be a very hot year, due to that effect.

Both the cosmic ray and 1998 hypotheses were picked up as proof that global warming doesn’t exist. These criticisms are important because by either disproving or proving them to be right, our understanding of this science improves. When the outlying criticisms of climate change are themselves shown to be lacking, the consensus grows stronger and vice versa. Like all cutting edge science, it’s a learning process.

UPDATE: you can read the Lancaster paper here, whilst some of Svensmark’s papers are available on his website, although I can’t find any after 2001.

[via BBC Science, picture by Feuillu]