Via Eric Gregory (who got it from ElectricLit), here’s a counterpoint to Nathan Bransford’s prediction of the happy demise of the rejection letter: Laura Miller at Salon isn’t quite so sure that the imminent ‘golden age’ of self-publishing will be a great thing. For a start, she too has met the slush pile, and bears its scars:

It seriously messes with your head to read slush. Being bombarded with inept prose, shoddy ideas, incoherent grammar, boring plots and insubstantial characters — not to mention ton after metric ton of clichés — for hours on end induces a state of existential despair that’s almost impossible to communicate to anyone who hasn’t been there themselves: Call it slush fatigue. You walk in the door pledging your soul to literature, and you walk out with a crazed glint in your eyes, thinking that the Hitler Youth guy who said, “Whenever I hear the word ‘culture,’ I reach for my revolver” might have had a point after all. Recovery is possible, but it’ll take a while (apply liberal doses of F. Scott Fitzgerald). In the meantime, instead of picking up every new manuscript with an open mind and a tiny nibbling hope, you learn to expect the worst. Because almost every time, the worst is exactly what you’ll get.

I can’t argue with that, based on my own experiences. But why worry – surely the audience themselves will take up the task of panning the gold from the silt, as Bransford suggests?

Perhaps this system will work better, but I’m not so sure. Contrary to the way they’re often depicted by frustrated authors, the agents and editors I’ve met are in fact committed to finding and nurturing books and authors they believe in as well as books that will sell. Also, bloggers or self-appointed experts on particular genres and types of writing are, in my experience, just as clubby and as likely to plug or promote their friends and associates as anybody else. Above all, this possible future doesn’t eliminate gatekeepers: It just sets up new ones, equally human and no doubt equally flawed. How long before the authors neglected by the new breed of tastemaker begin to accuse them of being out-of-touch, biased dinosaurs?

Furthermore, as observers like Chris Anderson (in “The Long Tail”) and social scientists like Sheena Iyengar (in her new book “The Art of Choosing”) have pointed out, when confronted with an overwhelming array of choices, most people do not graze more widely. Instead, if they aren’t utterly paralyzed by the prospect, their decisions become even more conservative, zeroing in on what everyone else is buying and grabbing for recognizable brands because making a fully informed decision is just too difficult and time-consuming. As a result, introducing massive amounts of consumer choice leads to situations in which the 10 most popular items command the vast majority of the market share, while thousands of lesser alternatives must divide the leftovers into many tiny portions. This has been going on in the book world for at least a couple of decades now, since long before the rise of e-books: Bestselling authors continue to sell better and better, while everyone else does worse and worse.

Miller suggests that there may come a point where readers presented with a sea of crap eventually decide to stop reading entirely. I suspect that’s highly unlikely; the rise of new (or slightly altered) gatekeeper systems is inevitable in such a crowded field, because reading fiction for pleasure isn’t going to go away any time soon, and so there’ll still be a need for someone (or something – Amazon recommendations, maybe, as a worst-case scenario?) to act as the filter.

But then again, maybe there won’t – as the success of Dan Brown (and many others) indicates, the general reading public don’t hold fiction to the same standards that critics and (some) editors do. To be honest, I wouldn’t be hugely surprised to find that things don’t really change much at all in the long run, as far as the relationship between sales figures and quality are concerned…

… which means we’ll at least still have unwarranted successes and underappreciated masterpieces to argue about. 🙂

Some quick links collected in a spare segment of a manic Monday, in lieu of our usual fare (i.e. me waffling on about stuff): here are some science fiction writers going all meta on our arses and writing about writing:

And to close up with a topic for discussion, here’s Seth Godin’s take on the oft-reported death of the slush pile:

If you have something good, really good, what’s it doing in the slush pile?

Bring it to the world directly, make your own video, write your own ebook, post your own blog, record your own music.

Or find an agent, a great agent, a selective agent, one that’s almost impossible to get through to, one that commands respect and acts as a filter because after all, that’s what you’re seeking, a filtered, amplified way to spread your idea.

What do you think: is this a case of Godin just not understanding the way fiction publishing works, and hence applying an inappropriate business model to it? Or is he prophesying the unavoidable future of fiction publishing? Your thoughts and opinions would be appreciated.

Hard-workin’ Futurismic fiction editor Christopher East doesn’t post here very often; not only does he spend hours combing through the slush pile for this very organ, a lot of his time is taken up by, y’know, having a life, and a job and a family. That sort of stuff. Not that I’m jealous or anything. Ahem.

So, if you want to know a bit more about him (and you should, because he’s not only one of the sharpest unpaid fiction eds in the business, but also a jolly decent chap, as we Brits might say), Chris has been interviewed recently by Andrew Porter of writer/reader blog The Science Of Fiction. Here he is talking about how he knows when a story is the right one, and on how he writes rejections:

Chris East: Of course, now that I’ve been at it for a while, I understand why most editors don’t [write personal rejections].  It’s not always possible (crush of time, number of submissions), it’s not always warranted (sometimes there’s not much to say – the story just doesn’t do it for me), and really, the effort rarely pays off (I mean, except for personal satisfaction, there isn’t much incentive).  It’s also not really an edtior’s job to teach writers — it’s the editor’s job to find stories.  But as a writer I always appreciate it when the editor says something helpful, so I do still try to provide some feedback.  I’m also proud that I’ve never resorted to using a form rejection.  I can see how people might think I do, of course – you do tend to repeat yourself once you’ve written a few thousand responses!  But take my word for it, I write every rejection from scratch.

Andrew Porter: As a zine that only publishes one story a month I would imagine that you are often sitting with several stories that you would like to publish but can’t. How do you make final determinations between near equals (i.e. topical relevance, good title, etc.)

Chris East: This has never been a real problem for us, actually.  In fact, our inventory tends to run on the thin side most of the time.  I suspect this is a combination of high standards and a fairly specific focus on near-term future SF – I guess there aren’t that many available stories that fall perfectly into our wheelhouse. So I honestly don’t recall having the kind of one-or-the-other decisions you describe.  The exception might be when we’ve  received a story very similar to something that we’ve already published.  If we’ve recently featured a story about brain implants, for example, we might hesitate to publish another brain implant story close on the first one’s heels.  (Which, since we publish so infrequently, equates to “the past several months.”)  But mostly, it’s kind of a know-it-when-I-see-it situation.  In other words, “Yep, this is a Futurismic story!”  Or, “Nope, it isn’t!”

Lots more after that… some of it quite surreal, in fact. Enjoy! 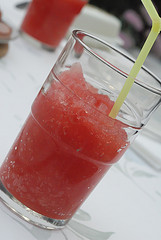 Short fiction writers would be well advised to follow the Apex Book Company blog, as I think I’ve mentioned before; they have lots of guest posts from writers, editors and other niches in the fiction food-chain, containing plenty of sound advice. Like this post from submissions editor Maggie Jamison, for example, which offers a little hope and solace for those of you who fear the anonymity of the slush pile:

Believe it or not, a submissions editor can remember your name, particularly if you wrote something she liked, even if she passed on it. If you pay attention to rejection comments (if she gives any), and keep working to hone your understanding of her market, chances are your next attempt will be closer to what she wants.

And here’s the funny thing (though maybe it’s just me): we want you to succeed. Of all the other submissions editors I’ve spoken to, the vast majority would much rather send an acceptance letter than the typical form rejection. Heck, even a personal “This was so, so, SO close!” rejection is more fun than the form. I think most magazines want to be the one that nabs the first few publications of a great up-and-comer, and I’ve always enjoyed the vicarious excitement when a manuscript from my slush pile is accepted and bought.

I know that’s the attitude Futurismic‘s very own hard-workin’ Chris East takes to the slush pile… if we didn’t want to publish good stories, we wouldn’t offer $200 per story and throw submissions open to all and sundry! [image by misscrabette]

Maggie makes some sound points about rewrites and re-submissions, too:

Unless I’ve specifically asked you to tweak the story and send it back, DO NOT resubmit the same story. The only other way it might be acceptable is if you rewrite the story so completely that I can’t tell I’ve read it before. But then, it wouldn’t be the same story, would it?

As a submissions editor, I do try (when I have time) to give suggestions for what might make a rejected story just a little bit better. I do this so the author knows and can utilize this information to avoid the same issue in her next story submission, not so the author can tweak her story and send it right back to me. If I want to see a rewrite or a reworking, I will be very, very clear.

Of course, all this advice follows on from the basic rule of making sure you read the submission guidelines carefully for the venue you’re sending your story to. As Chris has pointed out here before, a great many of the stories we reject aren’t bad per se, they’re just not the sort of stories we publish. Researching your market is a great way to lessen the chance of the dreaded “thanks, but no thanks” response. 🙂

Hey, fiction writers – ever wonder what really makes editors tick? Sure you do; you’d love to know what really happens to your story when you wing it off for consideration at a favourite magazine or website.

The truth is, the slush is deep, and it’s rarely an editor’s favorite part of the job. Why do you think so many places have slush readers?

Most stories get at least a page out of me. Then I skip to the last 3 paragraphs, if I’m feeling generous. Some get less. Some work is so obviously bad that it’s startlingly easy to know it’s not going to work. But every story gets looked at. Nothing ever gets rejected without being partially read. Honest.

All five are honest, pertinent, and pretty funny. Go read.