Futurismic alumnus and all-round good chap Tobias Buckell has probably the most moderate and well-considered post on piracy I’ve yet seen from a mid-list author; go read it.

And as a reminder that squelching peer-to-peer protocols on the internet – even if it’s possible – will not defeat the economic problems inherent to infinitely duplicatable digital goods, here’s a DIY guide to building a portable wi-fi-powered peer-to-peer server into a lunchbox [via Hack A Day]. Think of it as a sneakernet on steroids; how you gonna hit that with DMCA takedowns?

[ * Yes, Canute was actually trying to make a point about his lack of kingly omnipotence; a doubled layer of irony for you, there. ] 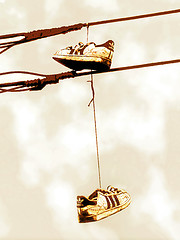 Building on Paul’s post on writing and piracy, I thought I’d flag an article by Rasmus Fleisher (of Sweden’s Piratbyrån) on the future of copyright;

Such practices constitute the “darknet,” a term popularized by four Microsoft-affiliated researchers in a brilliant 2002 paper [opens pdf]. Their thesis is simply that people who have information and want to exchange it with each other will do just that, forming spontaneous networks which may be large or small, online or offline…

One early darknet has been termed the “sneakernet”: walking by foot to your friend carrying video cassettes or floppy discs. Nor is the sneakernet purely a technology of the past. The capacity of portable storage devices is increasing exponentially, much faster than Internet bandwidth, according to a principle known as “Kryder’s Law.” The information in our pockets yesterday was measured in megabytes, today in gigabytes, tomorrow in terabytes and in a few years probably in petabytes (an incredible amount of data)…

In other words: The sneakernet will come back if needed. “I believe this is a ‘wild card’ that most people in the music industry are not seeing at all,” writes Swedish filesharing researcher Daniel Johansson. “When music fans can say, ‘I have all the music from 1950-2010, do you want a copy?’ – what kind of business models will be viable in such a reality?”

And there’s something about the idea of the sneakernet which, particularly when approached from a speculative angle, really captures my imagination.

Imagine – five years from now. With the internet collapsing under the bandwidth-distorting weight of iPlayer streams and mobile videoblogs, you watch the sun rise from the dovecot, anxiously fiddling with your (slightly battered) GPS-enabled iPhone as you await the feathernet delivery of a USB primed with the entirity of Gollancz’s SF Masterworks collection. For many, the most important question – was the USB in ordered directly from the publishers, or a copy from a mate?