Public service announcement: remember the NPR story about Yuri Gagarin’s best buddy Vladimir Komarov I linked to a while back? Well, the book on which the post was based way be rather less accurate than was suggested; the source of the revelations, former KGB officer Venyamin Russayev, appears to be unknown to anyone other than the book’s author at this point.

No clever commentary on this one; just an exhortation that you go and read the story of Vladimir Kamarov, Soviet astronaut and best buddy of Yuri Gagarin, and his harrowing death from falling to earth in a space capsule that everyone knew wasn’t fit to fly [via MetaFilter]. Not only does it shine a light on the spectacular levels of wilful ignorance that the Soviet top dogs were willing to engage in if it meant possibly getting a jump on the Yankees, but – if it can be taken as true – it’s also a story of making the ultimate sacrifice to save a friend’s life.

The space vehicle is shoddily constructed, running dangerously low on fuel; its parachutes — though no one knows this — won’t work and the cosmonaut, Vladimir Komarov, is about to, literally, crash full speed into Earth, his body turning molten on impact. As he heads to his doom, U.S. listening posts in Turkey hear him crying in rage, “cursing the people who had put him inside a botched spaceship.”

A bit of visual fizzle for the weekend, courtesy the mighty aggregation powers of MetaFilter. Born In Concrete is the gallery/blog of one Derek Stenning, who makes these rather super (if somewhat grim) Soviet-inspired space art posters: 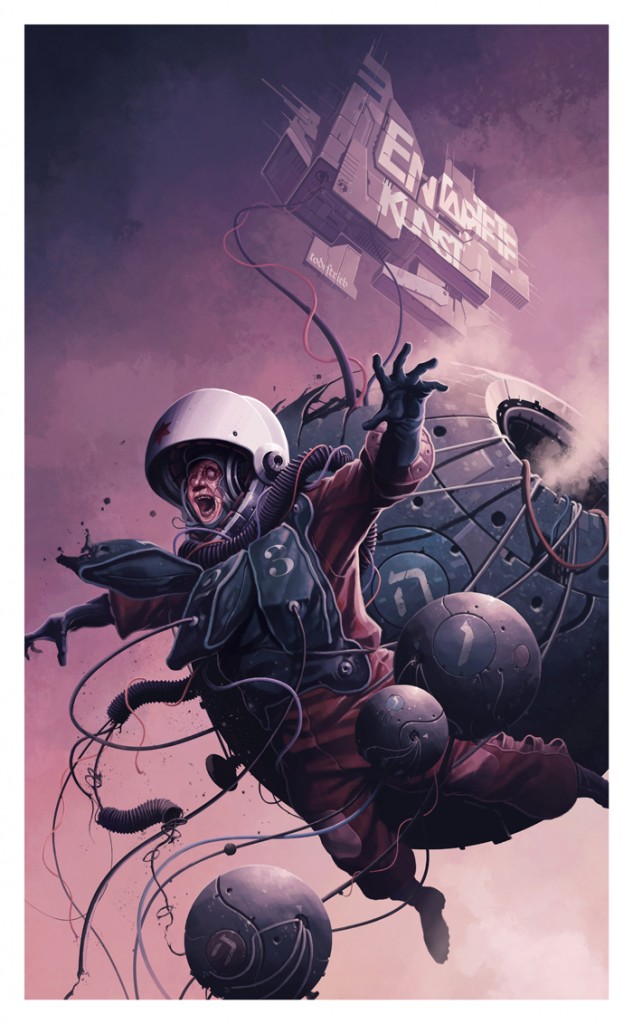 Lots more at the site itself, so go take a look. Someone in the MetaFilter comments thread suggested Stenning should be doing graphic novels of Stanislav Lem titles; I’d add Ken MacLeod’s Fall Revolution series to that suggestion. Heck, get the guy doing commissions for space opera novel jackets; that’s a strong visual hook, right there.