It’s very nearly the fiftieth anniversary* of a word well-used here at Futurismic: cyborg. So what better time for an anthropologist/archaeologist to advance his theory that homo sapiens sapiens is in fact the first cyborg species, evolved more in response to the facilitations of its own technology than to the environment it inhabits? [via ScienceNotFiction]. Take it away, Timothy Taylor:

Darwin is one of my heroes, but I believe he was wrong in seeing human evolution as a result of the same processes that account for other evolution in the biological world – especially when it comes to the size of our cranium.

Darwin had to put large cranial size down to sexual selection, arguing that women found brainy men sexy. But biomechanical factors make this untenable. I call this the smart biped paradox: once you are an upright ape, all natural selection pressures should be in favour of retaining a small cranium. That’s because walking upright means having a narrower pelvis, capping babies’ head size, and a shorter digestive tract, making it harder to support big, energy-hungry brains. Clearly our big brains did evolve, but I think Darwin had the wrong mechanism. I believe it was technology. We were never fully biological entities. We are and always have been artificial apes.

Technology allows us to accumulate biological deficits: we lost our sharp fingernails because we had cutting tools, we lost our heavy jaw musculature thanks to stone tools. These changes reduced our basic aggression, increased manual dexterity and made males and females more similar. Biological deficits continue today. For example, modern human eyesight is on average worse than that of humans 10,000 years ago.

Unlike other animals, we don’t adapt to environments – we adapt environments to us. We just passed a point where more people on the planet live in cities than not. We are extended through our technology. We now know that Neanderthals were symbolic thinkers, probably made art, had exquisite tools and bigger brains. Does that mean they were smarter?

Evidence shows that over the last 30,000 years there has been an overall decrease in brain size and the trend seems to be continuing. That’s because we can outsource our intelligence. I don’t need to remember as much as a Neanderthal because I have a computer. I don’t need such a dangerous and expensive-to-maintain biology any more. I would argue that humans are going to continue to get less biologically intelligent.

Interesting… and could be taken as a vindication for the hand-wringing of Nick Carr et al over how teh intarwubz be makin uz dumb.

But change is neither good or bad; it just is. Should we lament this outsourcing of our intelligence (I’d prefer the word outboarding, myself, but it’s not so trendy and probably makes people think of motorboats)? Is biological intelligence necessarily more desirable (or even “right” or “good”) than our cybernetic symbiosis? Taylor, thankfully, is not advocating a return to hairshirt primitivism in response to his theory… but I’d bet good money that a whole bunch of folk will do.

[ * There’s a reason I’m aware of this anniversary, and it’s not that I’m obsessed with the etymological history of neologisms**. You’ll find out how and why I possess that nugget of knowledge in the near future. ]

[ ** Actually, I am obsessed with the etymology of neologisms. It’s like butterfly collecting for the altermodern age. ] 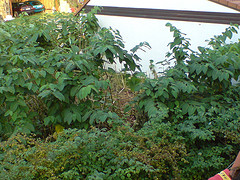 While Alabama may have its congongrass, we here in the UK have our own invasive species of Far Eastern weed in the form of Fallopia japonica, better known as Japanese knotweed. In their great wisdom, our Department for Environment, Food and Rural Affairs is planning to introduce another alien species – a form of plant lice – into the ecosystem to get rid of it. [image by dankogreen]

Laboratory tests were started on pests from Japan which control the knotweed by feeding on sap from its stems, causing the plant to die back.

The tests showed the chosen Aphalara itadori did not eat any other species, including closely related British plants and important crops.

Genius! I mean, the odds of a short-lifespanned insect evolving itself a wider diet when introduced to a totally new biosphere must be so small as to be negligible. Nothing could possibly go wrong with this plan!