Jamais Cascio pretty much nails my feelings on the imminent sermon from Mount Cupertino: 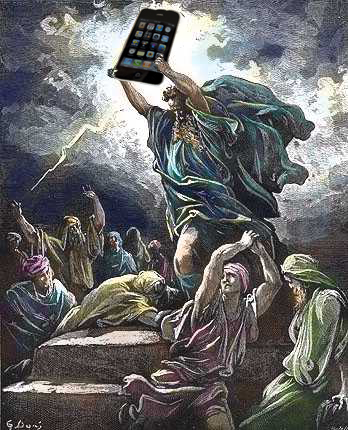 Yes, I’m sure it will be wonderful, whatever it turns out to be. I’m also sure it’ll be overpriced, packed with glossy proprietary software and matched by more affordable (and more open) hardware within six months… but hey, I’m just one of the haterz, yo. I can live with that.

If you want a less partial and more sensible response, Charlie Stross has a post detailing what he hopes to see from Jeebus Jobs later today, including this important point:

Finally, if I’m going to ask for a pony, I’d like Apple to pursue a more enlightened policy towards folks who want to, er, compute on the computing device they just bought. The iPhone OS is locked down tight because under the hood it’s a kluge; if you jailbreak it you discover to your horror that everything runs as root, and there’s even a hopelessly weak root password (“alpine”) on what is actually a networked UNIX box as powerful as a mid-1990s Sun workstation. I’ll settle for a virtualized sandbox if inecessary, instead of a fully implemented security system — but please can I have a shell, a python interpreter, and some elbow room? (Not likely, but I can hope …)

Not likely, indeed. But hey, there’s only a last few hours left before the product specs get spuffed all over the intertubes like joyous geek ectoplasm, so there’s still time to get some dreaming done… feel free to catfight in the comments if you’re so inclined. 🙂