Via Chairman Bruce, the next iteration of design fiction: fictional entrepreneurship.

Fictional Entrepreneurship is the use of design fiction to imagine businesses in order to discover what could be, creating things that are not impossible, but possible, often times derived from utopian, theoretical, and philosophical principles. Fictional entrepreneurship aims to author critical media through the creation of enterprises (imaginary, and real).

While reflecting on this definition, I have come to the conclusion that this concept is in no ways limited within the walls of academia, but can also be executed within a “practical,” corporate culture for the following reasons.

I’m becoming increasingly convinced that science fiction isn’t dying at all; it’s metastasizing. When the world looks like an sf novel, sf is no longer novel.

Related: revisionist entrepreneurship. For instance, what would have happened if MySpace hadn’t been bought by Murdoch’s News Corp?

June 2005. Freston misses his flight. In the airport’s VIP lounge, he spots one of the News Corp M&A team. Freston tears back to his office and hand delivers the letter that completes the deal. Viacom, the owner of MTV, has just bought MySpace for $500m. The deal releases its co-founders, Tom Anderson and Chris DeWolfe, from Intermix, an unspectacular online retailer.

Viacom uses MySpace to redefine itself online. The site needs a complete engineering overhaul, and anything not related to music or entertainment is stripped out. MTV programming, bite-sized interviews, exclusive tracks and live shows are weaved throughout the site. “We want MySpace to keep its hacky, creative ethos,” executives might have said, “while making the site cleaner and less cluttered.”

A little Panglossian, perhaps – I think MySpace was already go-karting down into the trough of disillusionment at that point – but what you have there is a tech-biz journalist picking a comparatively recent and well-documented jonbar point and sketching an alternate history around it. See what I mean? Sf has metastasized; the cultural body is riddled with it, and it’s penetrating to the marrow.

And let’s not forget the increasing ubiquity – and ease of creation – of quasifictional characters, events, organisations, texts… Joanne McNeil of Tomorrow Museum looks at the Web of Misleading Things:

Remember the real reason for Friendster’s decline? It was the ban on “fakesters.” Friendster cracked down on user-created profiles for celebrities, places, and things, instead of embracing it as another slice of the bizarre in the spectacle of social networking. So people moved to Myspace, where non-person identities were encouraged. The site even provided space for bands and filmmakers to upload multimedia.

Now, everybody knew that’s not really Andy Warhol leaving testimonials on your page. But what about that person you know as tiny Twitter avatar? Robin Sage is a particularly interesting example (Quite a number of fictional online identities are in the image of attractive female hackers. I imagine this creates even more tension/skepticism toward women in these communities.)

So long as social media participation requires no public records or birth certificates, we are free to use these services to reinvent ourselves, regardless of what Mark Zuckerberg says.

Is there a more slippery term in the modern word than “real”? 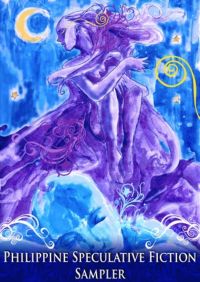 Normally I save up free fiction links for our regular Friday round-up, but as this is something a little bigger than usual I think it warrants special mention. Filipino genre fiction mavens Charles Tan and Mia Tijam have co-edited an entire virtual anthology of speculative fiction written in English by Filipino writers – a great way to expose new writers to an otherwise hard-to-access market. Here’s the table of contents:

Thanks to SF Signal for the heads-up… If you take a look, let us know what you think. 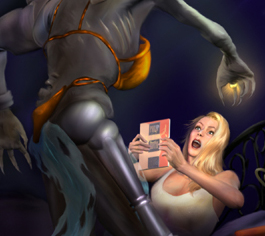 Ruth Franklin’s review of Michael Chabon’s “The Yiddish Policemen’s Union” starts off with a statement calculated to raise the ire of speculative fiction readers:

Michael Chabon has spent considerable energy trying to drag the decaying corpse of genre fiction out of the shallow grave where writers of serious literature abandoned it.

Something woke her in the night. Was it steps she heard, coming up the stairs — somebody in wet training shoes, climbing the stairs very slowly… but who?

The illustration accompanying this entry is cropped from the original drawn by bellatrys inspired by the LeGuin piece. There’s already a chapbook (pdf link).

Overall, Franklin’s review is not as dismissive as the opening sentence implies, but instead reflects what I think of as a profound ignorance of thoughtful, entertaining work being done in genre fiction. Her ignorance is captured best in the inverse of a complement she pays to Chabon’s book, calling it “a ‘what if?’ story for adults.” For adults — as if anything published in genre fiction is written for children. Why do you think the literary establishment is so ignorant of genre? [mefi]