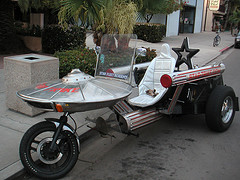 On this date in 1966, Star Trek premiered on American TV.  Discuss. 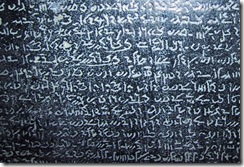 Star Trek‘s various starship crews seldom have any trouble talking to aliens, thanks to a nifty device known as a “universal translator.” Although the universal translator was invented, like the transporter, simply because it was the only practical way to tell a story originally sold as “Wagon Train to the stars,” it might actually be possible to build one. (Via KurzweilAI.net.)

So says Terrence Deacon of the University of California, Berkeley, US, who argues that no matter how alien a species might be, its language–even if it communicates via, say, scent–must still describe real objects in the real world, which means there must be an underlying universal code that, given enough knowledge about language and sufficient computing power, could be deciphered.

Deacon presented his idea on April 17 at the 2008 Astrobiology Science Conference in Santa Clara, California.

Testing the theory might be tough because we would have to make contact with aliens advanced enough to engage in abstract thinking and the use of linguistic symbols. But Denise Herzing of Florida Atlantic University in Boca Raton, US, points out that we might be able to test it by studying dolphins.

“Our work suggests that dolphins may be able to communicate using symbols,” Herzing told New Scientist. “The word’s not definitively in yet, but it’s totally possible that we might show universality by understanding dolphin language.”

New Scientist compares the proposed device to Douglas Adams‘s “babelfish,” a fish that translates languages. One hopes that if we do learn to understand dolphin language, the only thing they say to us, before decamping from the planet, isn’t “So long, and thanks for all the fish.” 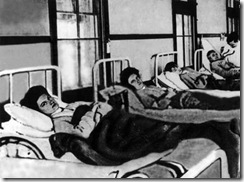 A European Union-funded project led by Philips Electronics aims to develop a hospital bed that can passively assess a patient’s heart rate, sleep quality, temperature and other criteria without the need to wire up the patient directly. (Via MedGadget.)

According to a BBC story:

The bed would include, not only an electronic weight scale and blood pressure monitor, but also sensors which measure heart rate, breathing rate and body movement while sleeping.

In addition, the patient could wear a vest with woven-in electrodes to provide a full electro-cardiogram reading.

All this information would be analysed on a PDA and the results sent via a telephone line or broadband connection to doctors.

The device, it is claimed, could even provide clues to interrupted sleep by measuring sleep phase patterns.

No word on whether it would have a big monitor over the bed with flashing lights and a cool beeping noises, a la Dr. McCoy’s sick-bay beds on Star Trek.

An interesting caveat from Dr. Nick Robinson of the Royal Society of Medicine’s Telehealth forum:

“We are used to making decisions based on taking a blood pressure reading on an occasional basis – and all the evidence we have for intervening is based on this. The real challenge for this technology is not taking the measurements, but working out what to do with it, so that we are not constantly getting false alarms.”

Can too much information about a patient’s condition actually be a bad thing? 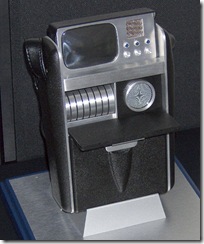 Philips has come up with a design for a tiny food analyzer, something that small food companies could afford: and something that raises the distinct possibility the day may not be far off when you’ll be able to carry your own personal food analyzer around with you to make sure you really are eating steak and not soy, or drinking Guinness and not somebody’s backyard brew with a load of food coloring in it (although if you can’t tell if you’re drinking real Guinness, you probably shouldn’t be allowed to drink it, anyway).

It’s all being made possible by “lab-on-a-chip” technology which puts the components for this kind of analysis on a single computer chip–just like in a Star Trek tricorder. (Via New Scientist, which made the Star Trek comparison first, so don’t blame me!)