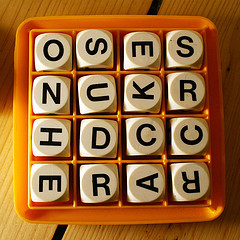 Stephen Fry’s latest blessay on words and their use is splendid, and it also includes a point relevant to the emerging Panopticon:

CCTV is such a bland, clumsy, rhythmically null and phonically forgettable word, if you can call it a word, that the swipe lacks real punch.

If one believed in conspiracy theories, you could almost call it genius that there is no more powerful word for the complex and frightening system of electronic surveillance that we lump into that weedy bundle of initials.

For if CCTV was called … I don’t know …. something like SCUNT (Surveillance Camera Universal NeTwork, or whatever) then the acronyms might have passed into our language and its simple denotation would have taken on all the dark connotations which would allow “One nation under scunt” to have much more impact as a resistance slogan than “One nation under CCTV”. “Damn, I was scunted as I walked home,” “they’ve just erected a series of scunts in the street outside,” “Britain is the most scunted country in the world” …

I for one will immediately adopt this usage (and the equally compelling “SS” or “Surveillance System” Fry goes on to suggest).

It’s a profound point: meaning matters, but so do the shape and nature of the words themselves.